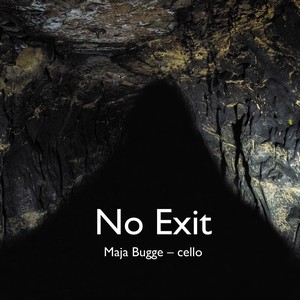 Very good cello album by Maja Bugge, a Norwegian player who recorded No Exit (DISCUS MUSIC DISCUS 74CD) in concert in 2017. The “unique selling point” is that she was doing in Standedge Canal Tunnel, and make no mistake she uses the surroundings as a totally integrated part of the performance. Matter of fact the aim was to mix up compositions with free improvisations, the latter being her response to this unusual setting.

If you want some idea of what it’s like to be surrounded by heavy Victorian brickwork while you’re attempting to make music, I direct you to the photo inside the CD. It tells us quite a lot…for one thing she’s wearing a construction helmet, probably on the advice of health and safety inspectors, and the stark lighting effect – presumably placed there for simple practical reasons – has the effect of emphasising her loneliness, as she faces the darkness ahead of her. There’s steel and determination in her stance, however, which suggests a strong-mindedness which I think translates into the grooves; it’s as though she could bore her way through the unknown for all three and one-half miles of this tunnel with her music, persisting in the face of unyielding resistance. I’m electing to read the record as a metaphor for this grim odyssey, something which equates to the hard decisions we must all face when we choose to go it alone, undertaking a task which no-one else can do for us. There may be ‘no exit’ in sight when we start out, but we must go and do it anyway.

As to Bugge’s playing, it’s rugged and almost aggressive in the way she stabs, swipes and bows her instrument to produce heavy growls and barks amongst the very beautiful musical interludes (which feel like they were lifted from a 17th century composition for viols and radically reworked), even rapping the body of the cello to produce resonate percussive blows. Pretty unorthodox, I would expect, and probably classical cellists who make a living playing pretty tunes are currently blanching into their handkerchiefs at the thought this record even exists. Can I stress it’s not just about using the natural echo of the tunnel as an acoustic sounding board for aesthetic effect; although that echo is there, I sense it’s not just to make the record more palatable with stony reverb. Bugge seems to be pushing back, answering the void in front of her with her resolute musical thrusts and stabs.

The notes also describe another dimension to this semi-conceptual work, in that she has studied the history of the site and has in her mind the idea of imitating the sounds of feet of men carrying the canal barges, and even the sound of the stones themselves being carved before that. All in all, Bugge has set herself a considerable intellectual and musical challenge, and she carries it off courageously. A huge success and a unique record.

Maja Bugge is a Norwegian cellist, composer and teacher. "No Exit" presents a solo performance in the Standedge Canal Tunnel as part of Marsden Jazz Festival 2017. The tunnel is the longest of its kind in the UK, stretching for three and a half miles underneath the Pennines.

Bugge is a fan of the dialogue between instrument and the surroundings. Even if this does sound like a John Butcher concept, the music is not so. Bugge's compositions and improvisations are calm, precise, carefully performed with the occasional hint at a theme and the occasional exploration outside the known boundaries.

Obviously, this kind of music should also be experienced in the setting for which it was conceived to better understand the dynamics. The video below will give some idea about this.