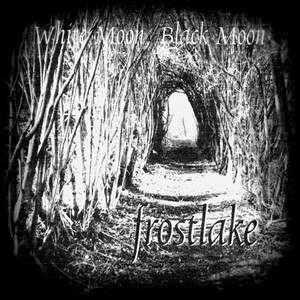 White Moon, Black Moon is the debut album from frostlake (aka Jan Todd), a songstress and multi-instrumentalist who might better be described as an enchantress, given the haunting quality of her songs. The element that most defines the frostlake sound, however, is Todd's hushed voice, which appears on all twelve tracks and, depending on the song, could conceivably invite comparison to Julee Cruise, Grouper, or Marissa Nadler. Admittedly, any project described as pastoral folk-prog risks being branded twee, but the darker undercurrent in frostlake's music protects it from any such label. - Textura

This is a work of fragile beauty, assembled with a fine sense of balance and atmospherics and designed to lull you into its many depths. In that regard it has a sense of cold, stillness and mystic beauty, like forest pond in midwinter  - Neil Nixon, author 500 Albums You Won't Believe Until You Hear Them

Beautiful ...atmospheric ...ethereal ...spooky! This short collection of adjectives straightaway characterizes this unusual album. All sorts of sounds and electronic treatments add to the swirling effect and peculiar, otherworldly atmosphere , often flutes and clarinets provide more sound colours.  The result is uniquely beautiful songs, somewhere in the sphere of post-rock, folk and electronic Art-pop, sometimes tending towards jazz and the avant-garde or a dense , sonorous mixture of styles. - Achim Breiling, Babyblaue Seiten

Dreamlike and chilly is the world inhabited by frostlake, the mysterious songstress whose name graces the b&w album artwork of White Moon, Black Moon. The gnarled branches of its trees have long since shed their leaves; the trails and roads are blanketed with snow. The singer’s breathy vocals draw listeners into this alien land — they are a soothing invitation while at the same time calmly urging patience and caution.

Recorded in Sheffield, UK and released by Discus Music, White Moon, Black Moon represents the solo debut of multi-instrumentalist, vocalist and songwriter frostlake. Her association with the Orchestra Of The Upper Atmosphere, with whom she also performs and records, plants her firmly at the crossroads of the rustically traditional and the cosmically spiritual. Indeed, members of that space-rock collective — including husband Terry Todd on bass — make appearances throughout the album. Nevertheless, this ethereal landscape is singularly the beautiful and icy domain of the singer/songwriter.

The path into twilight flows through “Black Winter,” whose ringing, meditative guitar creates the atmosphere above which frostlake’s voice floats like a layer of clouds. Her vocals seem to percolate and weave through the arpeggiated chords, strings, and electronic augmentation. The darkly beautiful  ”No Looking Back” zigs a different zag: here the wispy vocals seem to encircle themselves out of contempt for the deep synthesizer. When coupled with acoustic bass and drums, it creates a cold, eerily inorganic rhythm.

Descending further into this world, an elegant if eerie calm encompasses the listener, not unlike a warm blanket under which one is aware but does not feel the chill of a lightly falling snow. “Dark Winds,” for example, seems foreshadowing and ominous, yet the singer’s vocals never seem urgent or alarmed. Rather those elements present themselves in the background, bubbling to coalesce with the soothing vocal melody: the viola, the synth, or the sparingly used E-bow.

Perhaps what makes White Moon, Black Moon one of the more unique psych-folk releases of the year — and indeed what may be the album’s biggest success — is the way in which frostlake arranges and blends a seemingly disparate array of instruments. The way in which flutes, keyboards and slide guitars blend does indeed amount to a small orchestra which, although at times subdued, helps to build those airy layers upon which the essence of these songs rest.

By the album’s closing, we’re left a sense of familiarity with this quietly strange and beautiful wilderness. It is impossible, however, to unravel its crystalline mysteries in a single listen; tracks like “Connection,” “Quiet Storm,” and the title track, unveil themselves with such subtlety that one is barely aware of any secret being revealed until the moment has passed, and the song is gone. Thus, White Moon, Black Moon is — for those inclined towards the astral and the ethereal — deserving of multiple listens in order to discern its quiet beauty. -   Aaron Teixeira , Boston Hassle

This is a work of fragile beauty, assembled with a fine sense of balance and atmospherics and designed to lull you into its many depths. In that regard it has a sense of cold, stillness and mystic beauty, like forest pond in midwinter  - NEIL NIXON, author 500 Albums You Won't Believe Until You Hear Them

Frostlake is a singer and multi-instrumentalist whose real name I don’t know, though I see in the promo sheet that she is also part of Orchestra Of The Upper Atmosphere, who released the outstanding 02 set that I reviewed earlier this year. Frostlake plays electric and acoustic guitars, viola, synth, electric piano and electronics, with assistance from other musicians on bass, flute, synth, piano, clarinet, glockenspiel, drums and various forms of percussion.

The dozen songs on White Moon, Black Moon are singer-songwriter Folk-Prog at their core, through with a beautifully dreamy Psychedelic and Space-Ambient quality. Throughout the set I was impressed with the way ambience, effects and field recordings are deployed, being a powerful presence or embellishment, but always contributing to the larger picture that is being painted. I like the spacey atmospherics and effects, ambient bass and Celtic quality on No Looking Back. Similarly, the bass clarinet adds a dreamy ambient flavor to Night Watch. The accordion does the same for Quiet Storm. And ditto for the E-bow on the title track, plus slide guitar which injects a spaced out Dave Gilmour feel. Songs like Snowlight, that seem instrumentally sparse, actually speak volumes with their spectral moodiness and cautious but effective use of percussive effects and melodic ambience. Falling Through Shadows has a dreamily eerie Psychedelic orchestral Folk flavor that I enjoyed. I like the drifting, cosmic jazzy feel of Connection. Dark Winds and Endless Rain struck me as Space-Ambient takes on the Trespass era Genesis sound. And Thin Red Line is similar but with the bonus of some of the most exquisite compositional/instrumental arrangements of the set.

Frostlake’s vocals are beautiful and ideal for the supporting music, and her lyrics are variously introspective, poetic, and fairy tale narrative. If your tastes cover the gamut, and in this case convergence, of Folk-Prog-Psych-Space/Ambient, then you’ll find much to enjoy and discover over repeated listens to White Moon, Black Moon. - JERRY KRANITZ, AURAL INNOVATIONS

Beautiful ...atmospheric ...ethereal ...spooky! This short collection of adjectives straightaway characterizes this unusual album.  frostlake is apparently the stage name of singer and multi-instrumentalist Jan Todd, currently also part of Orchestra of The Upper Atmosphere (and married to it's bassist, Terry Todd).

All sorts of sounds and electronic treatments add to the swirling effect and peculiar, otherworldly atmosphere , often flutes and clarinets provide more sound colours.  The result is uniquely beautiful songs, somewhere in the sphere of post-rock, folk and electronic Art-pop, sometimes tending towards jazz and the avant-garde or a dense , sonorous mixture of styles. Warm, slightly melancholic, somewhat tight and edgy but mostly pleasant, this music slides through the ear canals as airy, fragile ...beautiful ...atmospheric ...ethereal ...spooky! - ACHIM BREILING, BABYBLAUE SEITEN

Martin Archer's Sheffield-based Discus Records is a home for the wilfully strange, and the occasionally unfathomable, but with frostlake the label presents its most conventional face yet. frostlake - the lower case "f" is deliberate - is a mysterious pagan goddess who weaves hymns to winter spun from the crystalline mists of the dark months on her debut album White Moon, Black Moon. She is also a member of Discus acts Juxtavoices, and Orchestra Of The Upper Atmosphere, the former an enticing "anti-choir", the latter a magnificent improvising cosmic rock beast. On her solo album and left to its own devices her muse crafts delicate but dense psych-folk, in so doing highlighting her many and varied talents, showing that she is not content to be pigeonholed into one genre.

This introspective and beautiful album stirs into life with Black Winter swooping across the still land, a song sung from the perspective of a bird in flight, frostlake's picked guitar and echoey atmosphere forming the background for Nigel Manning's flute which becomes the airborne avian, carried aloft on frostlake's multi-tracked harmonic choir. The restless protagonist of No Looking Back seeks escape, driving her car far beyond the originally intended destination to "...leave this madness behind, follow a road that has clearer signs". Haven't we all thought that way at one time or another?

The muffled stillness of snowfall, the contemplative effects of moonlight in a dark room, the hypnotic power of Dark Winds made moan, all this and more marries the natural phenomena of the dark months with its power to turn us towards the introspective side of our psyches. The warmth of this record is an aural equivalent of curling up by a roaring fire while outside one of those strangely calm winter snowstorms blankets everything in white inertia.

In addition to painting the eternal English winter canvas, there are human songs in here, too. Connection bemoans the surplus nervous chit chat that fills all the gaps, because there's nothing to say, really, no common ground. Judicious use of a chorus pedal on the electric guitar and minimal Korg piano combine to produce a forlorn atmosphere redolent of Nick Drake.

Quiet Storm is a tale of darkness rising, like a river soon to burst its banks, with subtle use of accordion and field recording over the plucked strings, painting a melancholy picture.The never ending wet grey of English winter is perfectly described in Endless Rain, frostlake gently bemoaning "Where do birds go to hide from rain, think I'll join them in their waiting game", while cyclical arpeggios gently tinkle away, and the subtle addition of clarinet in counter melody is a nice touch.

Sombre while simultaneously radiating warmth, White Moon, Black Moon has proved a timely, reflective, and spiritually cleansing soundtrack after the recent horrific events. It reminds me that those of us with a soul and a culture to cherish and respect will always triumph over the indoctrinated and spiritually bereft who through their misguided acts of pure evil would do us harm. - ROGER TRENWITH, ASTOUNDED BY SOUND

A collection of songs with an eerie strangeness and English ethereal quality, with haunting melodies, layered vocals and unusual sounds – SQUIDCO

If there is one thing that you can anticipate from the releases on the Discus label, it’s to expect the unexpected. This is a case in point.

frostlake is Sheffield-based singer, musician Jan Todd. On this debut release (White Moon, Black Moon), she creates layers of her voice and multiple instruments alongside contributions from other fine folks from the area including Martin Archer, Charlie Collins, Terry Todd and others.

The first thing that strikes you is the reverb-drenched near-whisper vocals. These are combined with layers of dreamy instrumentation that evokes a folky, psychedelic, progressive soundscape. It almost feels like one of those unearthed rarities of what is now termed “acid folk” recorded in the late ’60s or early ’70s.

However, the sound is brought up to date with one foot in the past and another with a hold on the present and future. The music is dreamy yet never slipping into a maudlin melancholy. There is always something going on to keep the listener engaged as the background sounds blend seamlessly with the often haunting layered vocals in the foreground. Definitely an album inviting repeated late-night listens. – CHRIS MELOCHE, WIRED FOR SOUND