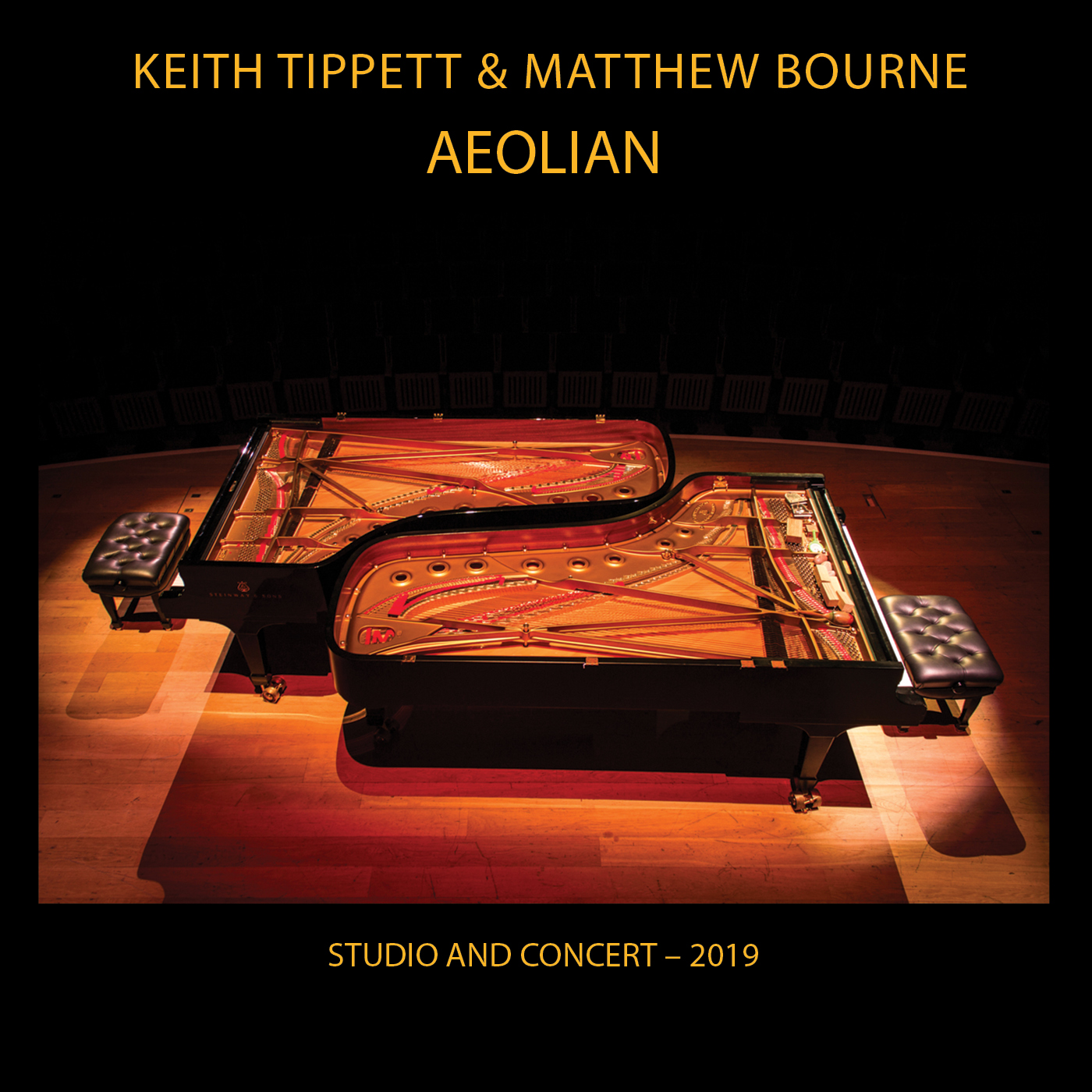 Spanning a three-year period between 2017-2019, Keith Tippett and Matthew Bourne performed a series of two-piano concerts - nearly all of which were recorded. Discus Music is incredibly proud to make the fruits of this vital work available as a double album, comprising of two beautifully-recorded performances from 2019: a set of individual studio pieces recorded at Leeds Conservatoire is paired with a remarkable live performance from Daylight Music at Union Chapel, London; which sadly proved to be Keith's final public statement.

Martin Archer's Discus Music continues its run of Keith Tippett releases with Aeolian, documenting Keith's collaboration with fellow pianist Matthew Bourne which started in 2017 and ran until Keith's untimely death last year. Aeolian is a 2 disc set made up of both studio recordings and a live set from London's Union Chapel in October 2019 which proved to be Keith's final concert performance. Disc 1 was recorded over 2 days at Leeds Conservatoire and consists of 8 duo pieces, all named after winds from various parts of the world plus a short solo piece by Keith to close out part 1. Etesians opens with a staccato flurry of notes and sets the tone for what proves to be an absorbing and immersing ride through everything from light zephyrs to howling gales and this continues throughout. Bise sees both Tippett and Bourne delving into the inner workings of their instruments; Bourne plucking and bending strings while Tippett modulates the sound of his instrument with his customary array of wood blocks and toys. Buran opens in imposing fashion with Tippett opting for a heavy left hand presence. All is not doom and gloom though and there are many lighter touches and even the odd snatch of humour here and there. I did wonder whether I was wise listening to this recording on the morning that hurricane Ida made landfall in New Orleans, and listening to Bora confirmed my suspicions. The piece seemed to encapsulate what was happening in Louisiana. Threatening at the start, one could almost see the storm building on the horizon, followed by the devastation as the wind blasts through the city before finally continuing on its journey leaving behind scenes of carnage. In contrast Samoon opens with Tippett playing variations on the 1st movement of Beethoven's Moonlight sonata with Bourne improvising gentle melodies which increase in intensity before gradually subsiding as the storm abates and the opening theme returns. The first disc closes with Something I Made Up, an exquisitely beautiful solo improvisation by Keith which restores calm after the intensity of all that has gone before. The live recording on Disc 2 was the final performance from a series that had started almost 12 months earlier at Marsden Jazz Festival and I was privileged to be part of the team that officiated on the day. That gig was Keith's first in 11 months the pair gave a breathtaking performance on that occasion. A year on and it is remarkable how much the pair's musical relationship has developed. The unbelievable level of cohesion in this improvised performance is remarkable. Changes of mood occur in an instant with some passages having a playful, almost nursery rhyme quality. The levels of almost telepathic understanding are astounding and remind me very much of Keith's long standing collaboration with Stan Tracey. Sympatico / Trade Winds clocks in at just over 36 minutes - around the same as the Marsden performance - and marks the final moments of Keith's long and illustrious career as a live performer and it is fitting that this piece ends literally on a high note. Aeolian, which will be released on 1 October is a wonderful and fitting memorial to Tippett's genius as a performer, and highlights Matthew Bourne's talents as a secure keeper of the flame for the future. Five Stars - Pete Woodman, EMULIJAZZ

This is a recording of two pianists working with some high cohesion vibes. I don’t know either’s playing well enough to pick them apart. I also don’t know how composed Aeolian is. For where it gathers density, in an ebb and flow of intensities over clear pulses, there’s a feeling that it could be highly composed — as with opener “Etesians”. By the same token, that same piece seems to pivot around someone introducing a melody from one of those piano pieces everyone can play. One piano is enough of a sound to quickly get very dense, so maybe the most remarkable thing about this music — and doubly so if it’s entirely improvised — is the restraint each player offers. There’s only so many sections where they’re playing in the same register and it’s only fleetingly; despite that there’s always a clear pulse and rhythmic variations, thereupon keeping the whole thing moving. Two players at the top of their game, basically, and some incredibly tasteful listening. Sadly this transpires to be Tippett’s last recording, but it’s quite a monument to his playing, right to the end — even if I can’t pick his voice out, this is some gorgeous music. Light and refined and fun and playful — there’s a music box “Love Me Tender” they extemporise over — twice — and a brilliantly warped improvisation on “Moonlight Sonata” (“Samoon”). It’s also got curious shape — the first part is a series of studio-recorded shorter pieces and the last thirty-eight minutes is a live show. So the recorded part runs the gamut of some industrial-for-piano / Iannis Xenakis in a bad mood rackets (“Bora”), to more conventional (albeit wonky) jazzisms (“Mistral”). The live show… well, it’s quite astonishing, a real tour de force of virtuosity, careful listening and inventive playing. - Kev Nickells, FREQ