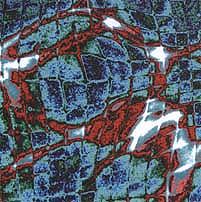 Pure Water Construction is a six part electroacoustic composition generated in the studio jointly by Archer and Fell. The five main sections are based on solo improvisations which have been computer manipulated, electronically stimulated, and orchestrated with additional improvisations, samples and written parts. The Prelude introduces each improvisor in turn over an electronically treated percussion ensemble. Part One multitracks air escaping from the tuba at different speeds, orchestrated with pinpoint drum machine sounds. Part two features only piano sounds, filtered and ring modulated in hommage to Stockhausen's early work. Part three pits the natural harp sound against overdriven organ, and introduces a melody for double bass, bass guitar and bass clarinet. Part four is a string trio of violin, cello and double bass, all subjected to some of Archer's most extreme electronics to date. Part five is a marathon guitar workout over bass and electronic percussion, closing with a section which reprises the previous parts. Features the players named above plus Archer, Fell, Charlie Collins (woodwind) and Gino Robair (percussion). Recorded and released with financial assistance from the Arts Council of England.

Technical note included with press release.
Both Simon and myself have worked over the last few years with the idea of creating composed works by collaging improvisations made by different players at different times with our own prearranged material, and this basic idea carries into the current work. The general availability of well designed digital editing software such as Pro-Tools or Soundscape makes working in this way much more viable than working to tape, as different ideas can be tried out very quickly in real time. This has enabled us to work in a spontaneous way in the studio as we have put these compositions together.
Part 0 was composed as an afterthought, the original idea being simply a suite of five pieces each featuring a different principal improvisor. The piece introduces each improviser's sound in turn, as samples from each of the following improvisations are used to play Simon's melodic material. Each of these is framed by sampled bursts of activity from Stefan. These melodies then combine into a more extended arrangement in the final section. The percussion part combines Martin's reprocessing of a Gino solo improvisation (using a midi-triggered filter to superimpose new rhythmic patterns onto Gino's original playing) with a simple part for tubular bells, which carries a blues connotation.
Part 1 is based around a structural idea from Simon. The principal sound heard is Robin's solo exactly as he played it (close miking of airlocks inside the tuba gradually being released, leading to orgasmic release (twice)), overlaid over a half speed version of the same material, plus additional samples of more traditionally articulated gestures. Additional textures come from analogue synth (deliberately excluded from sleevenotes in case people thought it was ALL synth) and Gino heard at quarter speed, both buried in the mix. The high percussion part is played on two SR16 drum machines which play the same material on two different sounds, and which move in and out of synch with each other. The percussion part was actually composed for part 3, but ended up here instead. (The same part also appears (with a different sound) on Disconnected Bliss by ASK (Discus 8CD)).
Part 2 again works to a structural plan put together by Simon and modified in the studio as we went along. Martin made several re-recorded versions of Chris's solo, using multiple effects units and filters, and the piece is sculpted out of these blocks of sound. The true piano sound emerges only in the middle and at the end of the piece. The sound world of this piece is deliberately somewhat retro, but we really love these sounds.
In Part 3 we hear Rhodri's solo pretty much as played subject to some editing and overlaying. This is paired with an organ part originally intended for the Stefan piece. Martin suggested the idea of a written melody for the bass instruments on this, which Simon composed. Live bass, clarinet and saxophone improvisations give a more realistically organic feel to this piece. I'd originally intended to feature saxophone extensively on this record, but this is as extensive as it got.
Part 4 is built around radical sound processing by Martin of the string trio. Jenni's slow melodic improvisation (first heard after about 2 1/2 minutes) was re-recorded to give a sense of large space, and the filtering gives the impression of an additional process of bowing superimposed on Jenni's original performance. Simon supplied some previously recorded bass improvisations which were given either a low-fi treatment, or had their resonance boosted to give the synth-like tapping effect in the centre of the piece. The opening sound in the composition is a violin drone distorted by LFO driven filter. The extremely high sounds akin to a dentist's electric polisher are also played on violin, and I was very pleased to be able to recreate one of my favourite sounds from the real world. The structure was developed jointly in the studio as we went along.
In Part 5 we left Stefan's solo unedited except for a brief drop-out near the start, where he makes way for a Varese-like interlude. He's heard first against a percussion part from a reprocessed Gino improvisation and an SR16 (note the stereo spread which recalls Ringo's eccentrically recorded part on Penny Lane), before Simon joins on played-live bass guitar. The structure dictated itself, (being traditional guitar solo, bass solo, drum solo (cymbals only)), before the closing section. Gino's reprocessed hi-hat kicks it along before subsiding into the density of the mix as chance procedures take over to reprise sounds from previous sections before Stefan's unaccompanied coda takes it out.

"A fine progression in Martin’s electro-acoustic exploits. Rather than being just improv, he’s always had a constructive approach to the work. None more so than on this release where Simon Fell brings his ability to find fluidity in the face of impending chaos, making the album a completed puzzle box. Attempt to take it apart and it’ll fall to bits… There’s a slew of people making albums with computers and found sounds, but the results are too often piece-meal in vision and effect, but with every album Martin expands his sonic vocabulary and editing skills. In Simon Fell he’s found an ideal collaborator. If you’ve heard any of Simon’s terrific free-jazz workouts, you’ll know his recordings and live work have always complimented and enhanced the playing of others. This time he’s brought out the best in Archer." – Progress Report

"Adds several dimensions to a world of ideas already pushing the boundaries of modern composition......evoking a wild mixture of emotions.....cathartic and expressive.....Once again Martin Archer and his collaborators have successfully created bridges between worlds previously barely imagined and they illustrate just how clearly modern recording techniques can further harness such vision. The line between madness and genius may well be thin, but Martin Archer certainly knows how to parade a carnival along it." - Fourth Dimension.

"If you can simply allow yourself to dig the intricate and sometimes outrageous juxtaposition of textures, patterns and timbres, it becomes a brilliant piece of work.....Light years better than 99% of the sterile contemporary academic stuff that passes for cutting edge electroacoustics today.....The things Archer can do with the sound of a piano are quite amazing, and in themselves offer ample testimony of his studio genius.....Aural treats abound.....The sort of recording that's going to offer surprise and delight every time out.....This CD is a rich, remarkable statement." - Bill Tilland, Motion.

"Pure Water Construction is similar but completely different (that paradox again). The premise has shifted, and this makes for a new focus in the music. This time, it seems, Archer has allowed a single solo improvisation to substantially structure each of the five main sections (there is an introduction which seems to be more of a studio cut-up). These improvisations were then taken away and given the studio treatment (by both Archer and Fell), following their logic but developing it with edits from other improvisations and electronic manipulations and re-orchestrations.

It starts -- after a wonderfully hectic "Part 0" which sounds like, but of course isn't, a group improvisation -- with tubist Robin Hayward. His steam-train textures, overlaid with bells, motors which sound like running water and odd tapping sounds manages to hold the imagination for a good seven minutes before he moves into more conventional, note-based territory.

Contributions from Chris Burn, Rhodri Davies, Jenni Molloy and Stefan Jaworzyn follow; each piece sounds incontrovertibly like its originator, and as one listens one really begins to get a sense of what Archer and Fell have achieved here. Keeping the integrity of each performance, they have transformed it into an impossibly sophisticated composition; a result which would be nigh-on impossible, anyway, using either composition or improvisation alone. Fell even crowbars in one of his trademark serialist jazz heads ("Part 3"), but on the whole the feel is similar to that of Ghost Lily Cascade, brooding, sombre and restless below the surface, with less in common with jazz than with electroacoustic composition. As a result of its methodology, however, the music on this disk is much closer to the familiar models of free improvisation than its predecessor. That, though, might just make it even more subversive in the face of all those improv purists who look on the studio somewhat as members of the Temperance Association used to regard the local pub.

Without wanting to make too much of the Freudian angle, the metaphor of a body of standing water comes up too often to be ignored. Of course, it has many connotations -- its secrecy (how deep is it?), its hidden threat (drowning, lurking Loch Ness monsters), its blankly reflecting surface on which one can only project one's own image, transformed by its own movement. Whatever your preference, these are two beautiful, well-played, conceptually rich disks which come highly recommended." - Richard Cochrane, Musings

"With this work Archer has documented his unique take on Euro Improv. The result actually sounds more live than some concert performances" – Jazz Weekly

"Concerns itself with liberating all manner of sound sources from their original context. Overall, the pieces evoke the feeling that lines most others would turn away from are being crossed, without once losing site of the juxtaposed odds. Which is a good thing and should be actively encouraged as much as possible" - Adverse Effect.