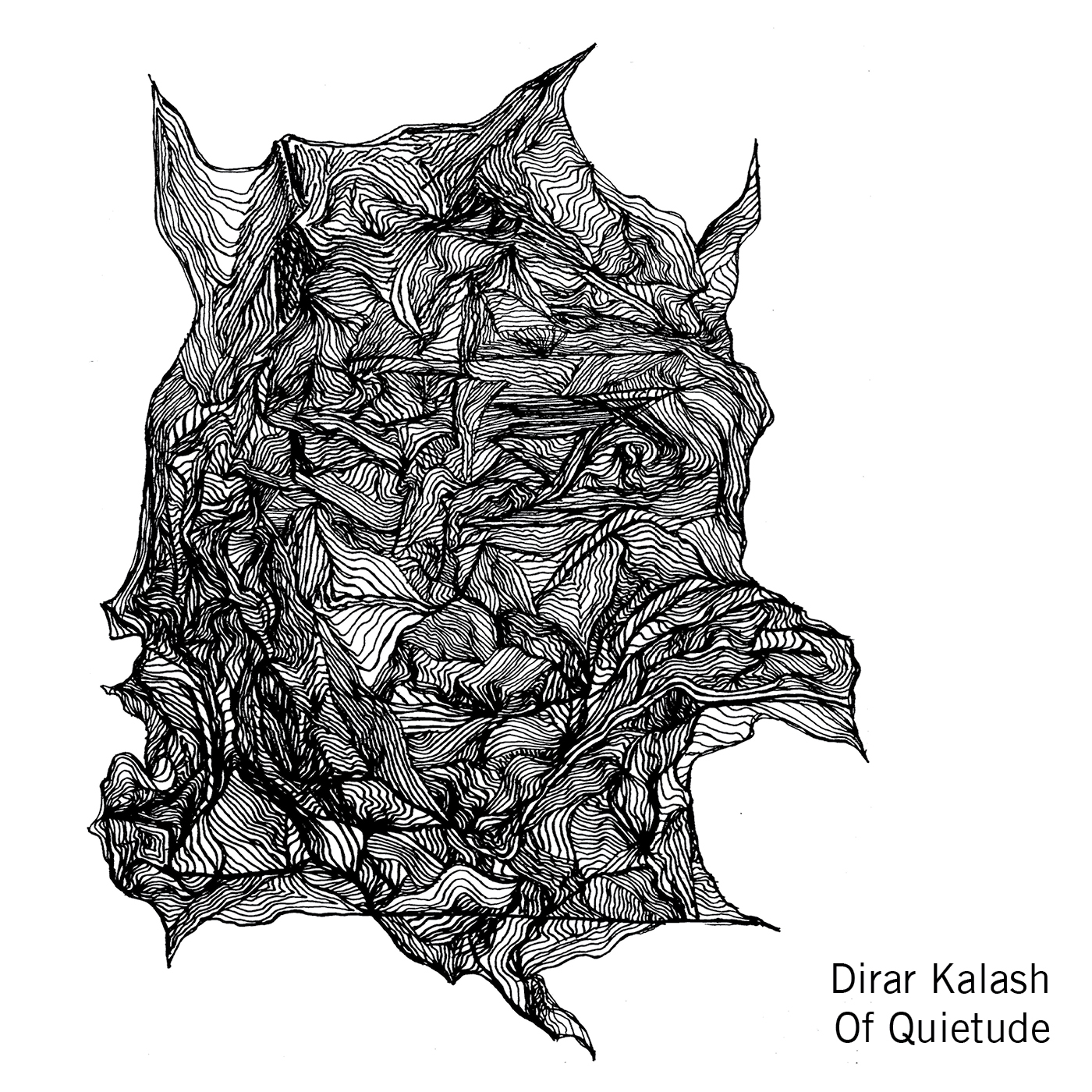 Dirar Kalash is an improvising musician currently based in his native Ramallah, in the state of Palestine. Opportunities to perform are virtually non-existent. Even access to a proper instrument is impossible at the current time. On a rare visit to the UK early in 2020, we are fortunate that Dirar found an opportunity to record with the master sound engineer Simon Reynell, on a fine instrument in the beautiful acoustic of St Paul’s Hall at the University Of Huddersfield. The plan had been to record some compositions. However, Dirar’s instinct, on encountering a first class instrument after so long an enforced break, was to improvise instead. These recordings are the result.

Another great, in fact important, release from Discus. I quote from them: Dirar Kalash is an improvising musician from Ramallah in Palestine, where opportunities to perform are non-existent; even access to an instrument is at present impossible. This recording was made on a rare visit to the UK earlier in the year (2020) at St. Paul’s Hall in Huddersfield (excellent acoustics). The plan was record some compositions, but encountering such a first class instrument after so long, Kalash chose instead to improvise. The two long pieces on this CD - making the most of the match of instrument and acoustics - relate in their pace - and concentration on touch, suspension and a kind of pointillism - mostly (as I hear it) to Morton Feldman (timbral, non metric, restraint; a trust in instinct) and Karlheinz Stockhausen (moment form). Emotional complexity and intelligence saturate the performance, but it’s the sound and the absence of narrative (and genre) that make this a highly unusual experience. - Chris Cutler, ReR

Dirar Kalash originates from Ramallah in the state of Palestine. From early on he grew up with Arabic music. Western music – above all jazz- came later in the picture. He learned to play oud, piano and saxophone. He moved to the Netherlands for continuing his studies at the Institute of Sonology in The Hague. Here he also recorded an experimental album with Josue Amador and Arvid Ganga (‘Fading Ground’). He developed into a musician and sound artist who works within “a variety of instrumental, compositional and improvisational contexts”, as he explains on his website. Most of his work so far appeared on Al-Bayān, a Berlin-based label that released duo works of Kalash with Jasper Stadhouders, David Birchall, Andrew Lafkas, John Tilbury, a.o. In 2018 he invited Cactus Truck in Palestine for a combined tour. His activity covers a wide range of musical projects. This new solo album is another example of this. From the extraverted and loud cacophony by Cactus Truck we now turn to reflective piano music. Early 2020 he visited the UK and recorded a piano session in St. Paul’s Hall at the University of Huddersfield. Two extended improvisations ended up here on CD: ‘Thresholds at Fingertips’(35:11) and ‘A Rift in Time’(26:29). As the title of this release suggests both lengthy excursions deal with quietude and silence. In his stretched-out minimalistic playing Kalash creates tranquil and reflective atmospheres. Not following new spirituality conventions. For that, there are too many frictions and tensions in his music. Morton Feldman seems a more valuable point of reference. Both improvisations are built from short movements and gestures, using contrast, timbres and silence. His style doesn’t refer to jazz nor to Arabic music as far as I can judge about this. With his reduced and modest approach, he succeeds in keeping you attentive and concentrated, wanting to know what happens next. He doesn’t build up towards climaxes or dramatic turning points. The drama is in the small patterns. Besides Kalash, the piano is the other star of this album. The excellent recording makes all the deep sonorities of the instrument almost tangible.  - Dorf Mulder, VITAL WEEKLY http://www.vitalweekly.net/1259.html

As implied by the title, Of Quietude features lengthy paused moments amongst its extensive compositions, both clocking in at over 25 minutes each. Exercising much restraint over the course of the two compositions, Kalash takes his time building the energetic ebbs and flows that constantly push the compositions between fleeting moments of somber melancholia, anxiety inducing tension, and subtle discord. None of these moments linger or overstay their welcome, seemingly unrooted from conventional musical tradition. Reynell’s engineering throughout Of Quietude is certainly worthy of much praise, perfectly capturing the full body and resonant tone of the acoustic piano amongst the cavernous natural reverb of St. Paul’s Hall. – Scene Noise https://scenenoise.com/New-Music/of-quietude-expansive-free-jazz-piano-improvisations-by-ramallahs-dirar-kalash

Discus has released an album by Palestinian improv player Dirar Kalash, somebody for whom the opportunities for playing at all in his native land are few and far between, let alone performing live. Fortune prevailed and brought him across to the UK and he had the chance to play and record at the University of Huddersfield. This document of that opportunity is an extraordinary work.

The first thing you notice about Of Quietude is the space that lingers between the notes, as if their selection is a matter of great decision. There is a thorough examination of the keyboard as if it were a palette, studying the canvas and trying to figure how to connect the strokes. This provides an inkling to his thought processes.

You can almost feel those processes as some notes are left to decay while others are torn off in their prime, like a misstep. It feels like an evolution that requires the long duration of the two pieces here to fully uncover their meaning. There is sudden insight and then darkness and some repetition, but with subtle, nuanced variations and no small amount of suspense, the repeated high notes providing drama.

The second piece includes the plucking of the strings and some thunderous rolls with a slight shift in structure. There is an intensity to the strings, some sounds appearing smaller and more distant with a softness to the damped notes and some repetition appearing as if from a mist. The repetition here is tantalising; for how long will it continue and into what avenue will it lead? You feel there is a little more deliberation; but when the sustain rolls, the empty auditorium seems to flicker into focus and you could hear a pin drop.

At other points, it is like following somebody down a dark path with the terrain constantly changing and you are unable to see properly, just allowing your guide to be your direction. The whole hour or so is great, but you have the feeling that Dirar didn’t really want to stop; and when you discover that he hasn’t touched a piano since this January recording, then it gives even more poignancy. An essential album. - Mr Olivetti, FREQ

Of Quietude was born during a rare visit to the UK in early 2020, a trip that afforded Kalash the chance to work with master sound engineer Simon Reynell, and an impeccable acoustic piano in St. Paul’s Hall in the University of Huddersfield. Though originally aiming to record some prewritten compositions during this visit, Kalash was overtaken by this encounter with the “first class instrument” after so many months of lockdown-enforced musical hiatus, and went about improvisings the recordings that would become the hour-plus long project.

As implied by the title, Of Quietude features lengthy paused moments amongst its extensive compositions, both clocking in at over 25 minutes each. Exercising much restraint over the course of the two compositions, Kalash takes his time building the energetic ebbs and flows that constantly push the compositions between fleeting moments of somber melancholia, anxiety inducing tension, and subtle discord. None of these moments linger or overstay their welcome, seemingly unrooted from conventional musical tradition. Reynell’s engineering throughout Of Quietude is certainly worthy of much praise, perfectly capturing the full body and resonant tone of the acoustic piano amongst the cavernous natural reverb of St. Paul’s Hall. - SCENENOISE  https://scenenoise.com/New-Music/of-quietude-expansive-free-jazz-piano-improvisations-by-ramallahs-dirar-kalash

In fact, the sense of improvisation seems to be to present something that does not await us. Despite the title, which presages that the contents of the album are not an angry expression of punk music, I did not expect this kind of piano improvisation on this album. The improvisation effect was therefore successful, which is not at all obvious. The songs offered – Thresholds At Fingertips (about 35 min) and A Rift In Time (about 26 min) – are two long, expressively different piano improvisations – more exploratory and vulnerable, the first, darker and left the second – but both thoughtful, reflective, yet endowed with a quiet, tension. You don't expect tension once you're in contact with this calm that you don't expect. It is not the usual tension after calm, but a tension of calm, of which Kalash traces phenomenology in sound, bringing us into one of his own version of this phenomenology of the tension of calm in sound. The elaborate dynamics, the density of the sound groups contrasting with the solitude of a note, the pinched strings that fragment the roundness of the percussive sound, the space drawn by the arrangement of notes on opposite registers, the sometimes wavy trend, other edgy (but they are soft edges) of the thought of sounds (sorry self-incitement, but it is really suitable for the occasion) of Kalash: all this makes us listen to the time of calm , as we didn't expect. 8.5/10 – Alessandro Bertinetto, KATHODIK

Now for some bracing modernism on the Steinway grand. The music on Of Quietude (DISCUS MUSIC DISCUS100CD) was 100% improvised by Dirar Kalash, and yet it’s every bit as dissonant and alienating as any piece of 20th-century serialism, tone-row music, or Cage-inspired randomness. Dirar Kalah of Ramallah in Palestine is a serious musician, working in composition and improvisation, and wrestling with “theoretical concepts”, and his work also manifests as mixed-media, sound installations, or photography exhibits. Not long ago (2018), he played a duo with John Tilbury at Cafe Oto, which I mention as I would imagine the two of them share a bit of common ground.

For this particular record, there’s a back-story about which one would like to learn more, but it seems that Dirar Kalash can’t perform live or even get to a piano very easily. When he came to the UK, he managed to get his hands on a piano at Huddersfield, and Simon Reynell was able to record the encounter. Apparently his long “musical abstinence” was so intense that he just had to improvise, and two lengthy solo pieces are the result. Further, he brought a lot of his own personal baggage and history to the session, and in his descriptive notes Kalash seethes with passion about politics, rifts, and “deep energy”; the thrust of his argument is that he was more interested in expressing these deep motives than he was with simply making music. His use of the word “tectonic” in this context implies that he’s a human earthquake waiting to happen, and while these piano pieces are not as wild as a Cecil Taylor assault, there’s a lot of compacted emotion in the stifled phrasing, the many discords, the staccato approach which betokens a personality who doesn’t suffer fools gladly. – Ed Pinsent, SOUND PROJECTOR