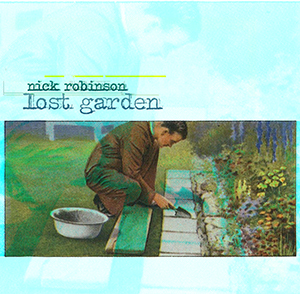 How life plays out. Nick Robinson's ambitions with Typhoon Saturday, They Must Be Russians and Dig Vis Drill ran into the sand in the mid-80s, but are nostalgically remembered as "Dreams to Fill the Vacuum - The Sound of Sheffield 1977-1988". But he became famous as a paper butterfly – he is president of the British Origami Society. But he remained faithful to the guitar, with new ears, which he credits to David Torn, as Nick Robinson Loops, on "No Worn Bearings" (2010) with Bernhard Wagner of Sonar. Discus offers a golden autumn, with Martin Archer in the Outward Sound Ensemble, in The Archers of Sorrow and with Steve Dinsdale as Das Rad.

Lost Garden (DISCUS 126CD), named after his temporary ambient duo with Andy Peake (from The Comsat Angels), now essentially shows his state of affairs, which he hints at as melancholic and floral and faunish with 'Cautious Tragic', 'Toccata Apologetica' and 'Silver Streams of Sorrow'. The wind blowing over the strings blows from Electric Eden (as Rob Young christened Britain's visionary music in its green power since the 60s). However, where the German tongue stroke in 'Zitterig' and 'Lebensfaltung' comes from, I found no clue. 'Trip_o_Phonix' is a pretty good metaphor for the furious or ethereally fragile spectra in pink and crimson through which his wheel of fortune spins. 'The Gates of Paradise' are never opened in the way of Robert Fripp, nor do his wheels rotate frippertronically-crafty or sonically.

Robinson's claim is between firebird, formulaic mantra and floating drift, whose mood touches on Gavin Bryars' 'The Old Tower of Löbenicht', his own, in daydreaming intuition, but also with all sorts of studioal chemistry that blurs the time arrow of guitar wizardry. He lets butterflies of crystal and rubber falter, morphing booming waves whirr and organs to wistfully pecked silver sparks. The guitar flow becomes a delta, sounds twitch and howl, strings chirp, seconds jellyfish back and forth. 'Bunting Nook' finally pulls out all the stops of the Robinsonade again with 18.5 minutes, from the orchestral intro to fragile circling, sparkling waves, silvery clapping, timid pause to a milling rush that overflows like alien blood and rough waves.