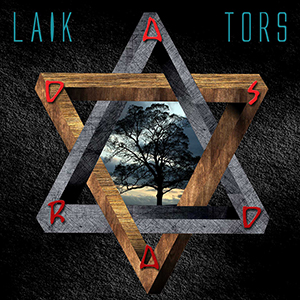 Unsure what the album title means, but from its cryptogrammic font type and the six-pointed star framing a solitary treetop at dusk, it’s pretty certain your ears are in for a wild, proggy ride. On Das Rad’s third outing, Nick Robinson (guitars, keys, electronics), Martin Archer (woodwinds, keys, synth bass, electronics), and Steve Dinsdale (dumrs, electronics) further solidify their position as the UK’s best kept secret, but a crime it would be indeed if that secret was kept much longer. Partially improvised, partially composed, the whole damn enterprise is so densely woven together only a forensic audiologist would be able to (possibly) untangle all its knotty, intricate components. Das Rad’s music combines so many disparate categorical elements, be it prog, fusion, avant-gardisms, electronica, etc., they’re practically their own self-minted genre. Don’t know where you’d file ‘em in your local record shop but they sure need to occupy some prime real estate on your home shelf.

Over another dazzling hour-plus of radically invented music, they manage to effortlessly cruise through, abort, and reshape the sounds of eras both bygone and yet to come. Dinsdale’s booming traps help to set alight the Richard Wright-esque keys and Gilmourian guitar refrains of “Offtwerk”, though such Floydian shades of pink are refracted through a prismatic lens of haughty Canterbury and chugging krautrock; the surging mellotrons about halfway through effect a total recall of early 70s British prog nicely, too. “Lebensmude” sharply turns things on its collective ears, its rhythmic martial surge an exercise in delayed gratification as pure, escapist tangerine dreams arise first out of elliptical keyboard effects smudged by Archer’s klaxon fuzz. His shouts into the wilderness coalesce mightily across the lengthy tendrils of the title track, Dinsdale’s tips, taps, twinkles, and twirls basking in spooky moonlight amidst strange atmospherics and the kind of wholesale free jazz/spacerock that wouldn’t be out of place on a lost Amon Düül side. Play this thing over and over because one solitary spin won’t come close to doing it justice—you can go down this disc’s labyrinth of ingenuity for years and hardly ever come up for breath.

Das Rad’s Laik Tors is their third album in four years and in a way continues their charge into the outer reaches of what a trio can produce when giving full rein to their imagination. Spread across one hour and nine tracks, not only do they veer between heavy rhythmic workouts and less dynamic, more textural numbers, but the pieces themselves often start out in one direction before ending up somewhere else entirely.

Vaporous keys and flute engage with a sinuous rhythm on opener “Offtwerk” and it dances off with a kind of proggy jazz feel, the rhythmic sturdiness supplemented by electronic whispers. Nick Robinson‘s guitar soloing is supple, dropping out and switching places with spiralling keyboards when you least expect it. There is a looser section where the sounds warp and find themselves dragged into a maelstrom of sound, before easing out the other side like a white-water raft.

There is a nice antithesis between one track and the next on this album, as if one were a reaction to the preceding. “Satanic Particles” is all bending and time-warping of sounds as spectral electronics hover in the background, with electric piano lending an air of gentleness to a haphazard chase, while the quasi-medieval string sounds of “Kapow!” come on a little like a spy theme. There is a a circular insistence led by the woodwind and a simple but effective rhythmic drive that uses space to lend an air of tension before the search for an exit leads to an explosive climax; and all this in just the opening three tracks.

The battle between structureless interplay and rhythmic heft is played out across the album. The synth bass of “Lebensmude” appears as if from a post-rock mist, everything in a dew-covered and morning-lit Explosions In The Sky territory in which they firmly stake their claim, before hauling it into an effects-laden crevasse, fuzzed and whacked. “Kopfkino” hints at ancient battles long finished, the crying ranks of guitar ascending from an acoustic guitar and flute intro; while once again I am reminded of Trans Am in the night territory of “Mauger Hay”, its glistening synth glory scrapping with growling guitar and cold urban electronics.

Laik Tors is a dizzying array of ideas and experiments that lead the listener all over the map with little respite. The tribal jaggedness and otherworldly drift of the title track is another unexpected avenue, nipping ghosts of electronics and fractured synths unleashing a guitar shred that seems to come from nowhere. It does feel over too soon, as if they still have a million ideas to unleash and the euphoric feeling that overrides the closing track warms the cockles, its spiralling sax and murky bob and weave highlighting the returning motif; while the real secret is the subtle percussion keeping below the radar but always there, ready for anything.

Das Rad is a trio from Sheffield, UK and this is their third album following ‘Adios Al Futuro’ which received positive reviews in Prog Rock magazine and other places. A mixture of composed and improvisational music Das Rad is Nick Robinson (guitars, keyboards, electronics), Martin Archer (brass, woodwinds, synths, synth bass, electronics) and Steve Dinsdale (drums, keys, electronics). A good entry point would be the rocky ‘Kapowl’ which features some sterling sax and synth work, although the atmospheric 10 minute ‘Lebensmude’ might give a better idea of what the band is all about, slow-burning expressionism with its subtle guitar and rolling drums.

It’s all about the ambience as on ‘Kopfkino’ as Das Rad build on basic melodies later taken up by acoustic guitar arpeggios, to create a palette of rich sounds, Robinson’s guitar blazing away in the background, woodwinds and sax driving the piece on, the drummer’s role often necessarily understated gelling it together with prominent synth bass lines, a few humorous exchanges thrown in as the music moves into free jazz fusion mode. The stop-start motoric beat of ‘Mauger Hay’ is a nice change of pace and the sustained organ chords supplement the probing guitar lines well on the title piece. ‘Laik Tors’ is a challenging and quixotic but ultimately satisfying album that will appeal to lovers of more adventurous forms of music.