Beck Hunters - Has It Been Found? 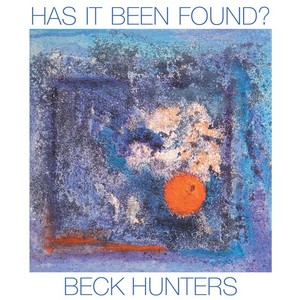 Whoever wrote the liner notes seems to have been reading A. J. Ayer, the well-known Tottenham Hotspur fan and part-time philosopher. Freddie Ayer wrote Language, Truth And Logic (the title that’s cited without attribution) when he was 26, and as he always subsequently confessed, it has an air of callow overconfidence. Its argument was that the only meaningful statements were those which satisfied some principle of verifiability, so that almost all ethical pronouncements, religious or spiritual claims and, presumably, aesthetic judgements were neither right nor wrong, but plain meaningless.

It was a popular position for a time in British philosophy, though I recently read a Prospect article that referred to the “influential wrongness” of Ayer’s position. What’s the relevance here? Well, Mick Beck and the two Hunter boys have created a set of improvisations that attempt to answer the question in the title. If improv is all about question and answer (as opposed to call-and-response), or the interrogation of musical quiddities, then it seems a very good metaphor for this music.

Mick Beck is no longer a callow young fellow, if he ever was. His music, as underrated even on the British scene as that of label boss Martin Archer, is full of mature thought and what can only be described as a kind of calm wisdom. He may well, as these titles suggest, embrace paradox and confusion and wonder, like the Roman procurator, what truth really is, but he doesn’t get either downcast or unduly categorical about it. It is rare to find improvised music that sounds as resolved as this, and that’s meant in every possible sense. What Is It? sets up a series of what sound like 12-tone assertions that are then treated in reasonably orthodox serial fashion, but there’s no head-scratching ambiguity left in the air at the end. It’s as nicely finished as a diatonic folk song, and I defy you not to nod your head and smile, even if you don’t know exactly what they’ve just done.

Likewise The Guardians Of Truth, which is played on bassoon and allsorts, with guitar and some of the deftest brushwork you’ll hear from a young contemporary. The double reeds enjoy only a shaky reputation in jazz, despite a few sterling efforts to bring them into the regular roster of instruments, but Beck’s the only exponent of the bassoon who really convinces, and it’s that air of stoical calm he exudes that makes it work.

The trio’s first album was called The Hunt Is On, and you can read what you like into the juxtaposition of the two titles. The pace here is more collected, confident, self-possessed. The answer doesn’t matter, any more than answers to ultimate questions mattered to Ayer (who once wrote about a near-death experience that briefly shook his confident materialism; he regretted saying anything about it later, which was a bit of a habit with him), but the possibility that this kind of music can offer answers is what is important. Those of us who enjoy free improvisation sometimes wallow a bit in its ambiguities and surds, in the same way that we winced if Derek Bailey should play a consonance or hint at a tune. We really shouldn’t. Here’s a perfect specific against that approach.

Beck Hunters‘ Has It Been Found? is all about improv. A trio of guitar, percussion and sax/bassoon, they have generated a series of responses of sorts to their 2014 album The Hunt Is On.

Now I must confess, I sometimes struggle with some free music, particularly if it is too insistent and abrasive. There is a time and a place for it and you really have to be in the right mood. Beck Hunters are almost the antithesis. It is playful and sensitive and each player is so conscious of how their element will interact with the other two that you can almost hear them tiptoeing. That isn’t to say that they don’t know how to push the song along when needed and they are fortunate to have such a responsive and subtle drummer who know just when to hold back and when to let loose.

The album is spread over four tracks of varying lengths (one is half an hour, but somehow never outstays its welcome) and rather like the Das Rad album, you feel that these tracks have a natural length, subconsciously agreed on. Opener “Yes And No” has subtle, taut drums, playful sax and exquisite high-end guitar. It doesn’t feel too serious and the players are constantly testing one another, but always leaving plenty of space for the others to colour in. Sometimes you feel that there is a half-remembered tune in there somewhere, but they grow bored and nip off at a tangent. I kept having an image of a troop of fox cubs bouncing and play fighting, circling one another and zipping off into the undergrowth.

“What Is It?” comes across like the aural equivalent of a magic eye picture. If you stare with your ears into the middle distance, everything comes together like some alchemical transformation. The whistle blasts that permeate the track are a bit of a shock, particularly as they are not afraid to drop to near silence. The twenty-nine-minute ‘Guardians Of Truth” really pushes the limits of the listener’s hearing. Some of the sounds slip out of the speakers like wraiths residing in a rambling mansion. Outside, young Victorian ladies are playing hide and seek in that indolent way of people with a lot of time on their hands while inside, we move through apparently empty rooms, fleeting snatches of movement seen out of the corner of our eyes. Back outside, the sax circles like an ominous bird of prey, the sound looms awkward and gnarly, but gradually diminishes to some half-seen, barely remembered image, the rustle of bells and tiny guitar notes signalling the conclusion.

The trio’s subtlety is a joy and final track “Paradox And Confusion” comes over like and enormous, abstract tapestry that closes the album out and leaves us with as many questions as when we started but that is the point. Beck Hunters are making us question our perceptions of sound, and you can’t ask for much more than that.