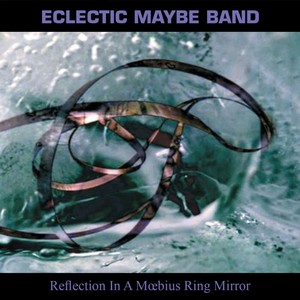 Roger Trenwith at The Progressive Aspect

Guy Segers is best known as a founder member of the only original Rock In Opposition band still working, Univers Zéro, although they seem to be on hiatus at present. However, one look at his Bandcamp page shows there is far more to his long and distinguished career than that. One of his more recent projects is the Eclectic Maybe Band, a place where live band recordings are later embellished in the studio by a host of distinguished guest players.

Reflections In A Mœbius Ring Mirror is the second album from the collective, released on Martin Archer’s… well, there’s no better word than “eclectic” for his home for musical outliers known as Discus Music. The Eclectic Maybe Band are a perfect fit for the label, and this new album sees a rewarding collection of compositions mostly by Segers, and collective improvisations, a whole where avant songcraft finds a perfect companion in the skilful jazz chops of the brass and reeds section of the band, augmented by some wonderfully exploratory guitar work, and varied keyboards.

The vocals are handled in a highly individualistic and idiosyncratic manner by Carla Diratz, and on Practised Decent Proximity her distinctive voice, that I could label sub-Dietrich, but that would be doing it a disservice, duels with the guitars of Segers’ fellow Belgian Michel Delville, and Ángel Ontalva, a pair who know a thing or two about coruscating improv, one of whose angry scratching on this track reminds me of Keith Levene in full flight on PiL’s Metal Box.

The album opens with the rollicking bass drive of Horizontal Bounce, an anchor for joyous and fulsome instrumental flourishes from the rest of the band. The second track, Socle De Gouache, is based around a riff composed by pianist Catherine Smet, which I’m sure I’ve heard somewhere before, but I can’t put my finger on it. It may drive me insane! Oncoming Season Wake and Liquid Tempo In A Lost Period sees the band dig deep into their avant repertoire, but it is not simply “out there for the sake of it”, there’s obviously a lot of thought gone into it, as with the rest of the album.

The more composed pieces complement their avant siblings and the entity hangs together nicely. Although the album is a whopping 74 minutes long, the variety and wide-angle scope of the music keeps one’s attention throughout. When Segers hits on a bass groove, the music rolls along with the accomplished ease you would expect, given the collective’s combined musical experience. As a case in point, some wonderful sax (Joe Higham) and flute (Roland Binet) weave their way through the delightful Dérive Sous Rive Gauche, ending with some highly treated guitar (Andy Kirk), and is possibly my favourite track from the album. And it smells nice!

Carla Diratz returns for the final two tracks, the loose-limbed Quoi? and the sprawling languid 13-minute plus album closer The Perfume Of The Flying Room, rendering more odd songcraft, backed by the resident jazz ensemble in a bar on an alien trading outpost somewhere in the Shoulder of Orion. They are winding down for the night, as the last few punters prop each other up in couples, shuffling slowly round the dancefloor, lost in their own worlds. As you will be once you get to the end of this alluring and intoxicating journey.

This is a brave album that takes risks, which always seem to pay off. Although leaning towards the avant in places, the sheer musicality of Reflection In A Mœbius Ring Mirror always prevents it from becoming indulgent. If you know anything of Guy Segers’ back pages, as if that would be allowed to happen, anyway! For those of you with an adventurous ear, I cannot recommend this highly enough. A classic in the making, in my never ’umble opinion.

For the second CD of this collective, initiator Guy Segers used a slightly different scenario than for the debut. This time no cutting and pasting after a full day of joint recording, but fourteen individual entries welded together into one. The end result sounds like a musical Rubik's cube with hidden side surfaces and gateways to parallel worlds where the laws of 'Hellraiser' previously apply. Reading further can lead to addiction.

The introduction consists of some bizarre sounds, a funky bass line, drum beats that follow the rhythm metal of Stéphane Galland, slightly wavy sax sounds that seem to bubble up from an abandoned basement, a guitar that suddenly gets a few sharp cuts and then we forget that nervous pianist who is clearly also part of this colorful company. A flutist slightly increases the ethereal content. Float for nine minutes in the thin but with every movement done under total control. You would almost think these are lost tapes from Miles Davis' 'Bitches Brew' session.

Eleven panels in total, the shortest of which clocked in at just under three minutes and the queen piece is drawn out in fourteen minutes. In five songs, lyrics are sung / declaimed by vocalist Carla Diratz.

Just about all important reference names from the late sixties and early seventies from jazz and progpop can be taken out. Explicit references are Pink Floyd (the spacy 'Socie De Gouache') and the entire Canterbury scene with Soft Machine and Robert Wyatt in the lead ('Oncoming Season Wake'). Many passages also fall under what you could call avant-garde ('Liquid Tempo In A Lost Period') and industrial noise ('Day Of The Tsunami'). In 'The Perfume Of The Flying Room' there is even a backing choir with a trumpet solo that evokes both Miles Davis and Don Cherry. Mega theatrical that Kamasi Washington would immediately sign for. The eleven minute long 'Spreading An Invisible Dream' is the most spiritual and ominous part of the saga.

In total, seventeen musicians participated in this new project. Among them Roland Binet, Joe Higham, Michel Delville, Andy Kirk, Catherine Smet, Franck Balestracci and Dirk Wachtelaer. The recordings were spread over different dates and studios. All details about this are meticulously stated on the cover.

A stunning script fully elaborated by mixmaster and bassist Guy Segers together with his long-standing “partner in crime” Pierre Vervloesem who was responsible for the mastering.

Look what I received today! The new CD from ECLECTIC MAYBE BAND «Reflection In A Moebius Ring» And what is that????? This is the newest project from Guy Segers (Univers Zero, GuruGuru, Present, Gong, Acid Mothers and many other projects and bands. And he had brought a lot of great musicians in the studio this time. And this is a surprisingly good CD, a really must have! I had the opportunity to listen to the music for some days now. (You can all find it on a link below).

I would like to call it jazzy/experimental rock with psychedelic undertones. And it’s nothing to be afraid of, it’s sometimes weird but it’s also totally cool! It’s all about opening the ears and mind. The first thought that came in mind after listening to the CD, was that the music is like watching surrealistic and abstract paintings…

It’s like the sounds and music comes from another world or dimension, where reality is streched and twined. It’s the jazzy and really groovy undertones, with pounding rhythms, raging guitars, sax and trumpets and dreamy soundscape that gives this fantastic feeling. There is a lot of great bass, sax and trumpet playing, plus the flute of course, that often lifts everything to higher spheres...

The music is really new and exiting and they have chosen to top it with an amazing singer,Carla Diratz. Her voice is like a painters stroke in this surrealistic world, and her deep, dark and mysterious voice are stretched like rubber bands to find new meanings and expressions. (Sometimes I feel like her voice is a mix between Diamanda Galas and Renate Knaup of Amon Düül) She is really the artist that finish the surrealistic paintings and give them the special twist!

The combination of everyone who contribute on this CD creates this very special musically landscape. And they all make this to something more than an average musical release. Nothing better than skilled musicians who love to play and are filled with playfulness!  And for those who loves music from artists and bands like Bill Laswell, Lol Coxhill, Miles Davis, Henry Cow, Fred Frith, National Helth, Soft Machine, Magma, Aria Primitiva, Franck Balestracci (who also is involved on this CD) Art Bears, Jaga Jazzist and even Motorpsycho, you will hopefully enjoy this music!