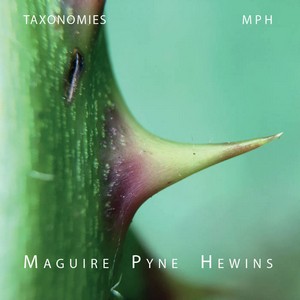 Considering how long and varied the careers of Alex Maguire, Martin Pyne and Mark Hewins have been, this is the first time that the three have played together, and Discus is the perfect home for their meeting of musical minds as MPH. The CVs of the three members include an incredible variety of musical styles that seems to have culminated in a freedom that is quintessentially pastoral, yet is full of rustling movement and then periods of calm. It is perhaps Martin’s love of tuned percussion and subtle rhythms that prevents these vignettes descending into formlessness, but instead allows them that unlimited freedom that charms from the off.

The deep resonance of the low piano notes, the slow chatter of the percussion, the gradual unfurling of the higher piano notes introduce opener “Tormentil”. The percussion is busy, gently urging the piece along, crisp and clear. In the background are hidden things, the odd blare, rustles and creaks. The textures shimmer in the odd silences, a brief guitar snippet is glimpsed through undergrowth. There is that melancholy of early morning apparent here.

an amalgam of styles that becomes a style of their own“Finger Muscle” is slower, with a little more care in the blurred guitar and vibes interactions. The players draw the movements out, savouring them in a way that they didn’t have a chance previously. This and “Meadowsweet” are more about the feelings of the players, less about the reaction to what is being lobbed across the studio, but they don’t allow the sounds to be confined. If they need to briefly scamper, then they do; but the piano and vibes duet is divine and where there is even more space, the vibes echo, hanging in the air like gossamer. On the whole, theirs is an amalgam of styles that becomes a style of their own, but the spare Americana-flecked vibe to “Psychedelic Frogfish”, with its shuffle of brushed snare does head us in a new direction; somewhere desert-y with the lonesome cry of the guitar and the dust-cloud of the Hammond lurking in the distance.

The insistence of the percussion on “Eyebright” is a constant as the languid piano notes drift and decay before our eyes, and that incessant movement travels through the long-form desert vibe of “Purple Loosestrife” as well. Here, over eleven minutes, the trio interact with chuckling creatures playing around your feet, bobbing and weaving, rather like the runaway piano of “Rocket Larkspear” that seems to break away with dizzying hops, skips and jumps. The sensation of chains dragging attempts to keep up with the vivacious piano — but by the time it arrives, it has done everything it needs to and skips laughing into the distance.