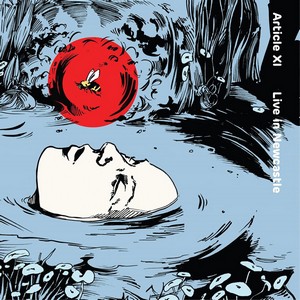 ".....But Manchester is fertile soil for a community of improvisers who practice their craft with enormous dedication and love. This live recording of 2017 is a perfect example of this. The open and inviting frames composed by Hunter provide an overall homogenous style, leading us through very introspective sections versus parts where they go full steam. There is room for solo improvisations as well as collective ones. Very free and open spaces are contrasted with more grooving sections. The performance is warm and enthusiastic with a modest presence by Hunter himself as a guitarist."

Article 11 of the European Convention on Human Rights : Everyone has the right to freedom of peaceful assembly and to freedom of association with others, including the right to form and to join trade unions for the protection of their interests. Interesting in this Coronavirus (Covid -19) time that this right to assembly becomes a no no, and outright problem that carries fear in its pocket, to keep us from even thinking about close contact with even one other person, and surely not a crowd of people. But this is about music so away from the chaos and to some magnificent performance for your ears.

An especially intimate mingling of free jazz, free expression, peaceful assembly, and brilliant skillset among eleven exceptional musicians, all in the name of the human rights stated clearly in Article 11 of the European Convention. Although recorded live at the Bridge Hotel, 2017, along with a double bill tour with Favorite Animals, this not to be missed official release on Discus Music in 2020, is available in 6 panel digipak with standout artwork by Angela Guyton. Nothing short of incredible.

The 2nd release by Article XI, led by Anton Hunter, who has perked up my ears for several years in various outfits, some simply stunning, all staying in a utmost inventive field. On this live performance, the arrangements have rare air, and a fresh dash of impulse, yet they are fully loaded as if each and every note were rehearsed for a year or more (well actually 2 of the works are reinvented from their debut album). There is nothing shapeless or jumbled here, just plentiful puzzles of progressive thinking big band with tease, twists and boiling over attainment. Article XI reach for something or some things, and find heights much further up in reality.

The compositions are either 'reimaginnings' of previous arrangements or improvised parts from the musicians in response to a framework already established. ‘Municrination’ (opening track) was in fact birthed from a melody chain by Anton that he presented to Johnny Hunter (his brother) and Graham South, where they improvised around the parts, and then in the end, Anton wrote their results into the final composition. This is the magic that happens with the ensemble and one of several ways the pieces of music get creation and life.

The stellar performers are: Sam Andreae - alto saxophone / Oliver Dover - alto saxophone / Simon Prince - tenor saxophone & flute / Cath Roberts - baritone saxophone / Graham South - trumpet / Nick Walters - trumpet / Kieran McLeod - trombone / Tullis Rennie - trombone / Seth Bennett - double bass / Johnny Hunter - drums / and Anton Hunter - guitar. For this writer/listener, this is like finding another wave of life changers like I did back in the early 70's with Tippetts, anything goes jazz rock, Soft Machine, Henry Cow, and a wide assortment of avant-garde ensembles from all over the globe. I have a second bloodrush with all these implacable, multi metrical, prize releases coming my way over the last decade.

Article XI have slight of hand at times, hop into trespass mode, get robust, lay back, find a new fountainhead, and retreat only momentarily, sidestep, and then create a new groove, all in a flawless exhibition of first class resolution. Think a live album won't have the same zip or drive? WRONG! If anything, this outfit has more presence and punch than anything they could have done in the studio. Folks this is alive and as poignant as one could dream of. An unforgettable live musical performance. MOST HIGHLY RECOMMENDED.

Encouragement, like a great many aspects of life, can come from many quarters, and it’s downright encouraging, not to say grounds for optimism, to hear a large ensemble going about some musical business with vigour and a sense of purpose not unlike that which marks the largely Dutch ICP Orchestra’s work, albeit without such potent measures of iconoclasm and disruptive humour.

It’s a band that sounds live too, in the sense that if there are routines stitched into the fabric of this programme, they’re very much engulfed by the whole, happening in the moment, which maybe why Municrination can cover a wide expanse of ground, including an episode of more than convincing free play, without toppling over into striving for effect.

While there’s little of the cunning about Always A Fox, an enduring impression is of a band that knows its worth without having to grandstand about it. Freedom, in the sense of nothing predetermined, is embraced wholeheartedly, and without the borderline primal screaming which has with the passing of time and the documentation of records become something of a by-product of large free and near-free ensembles.

The initial hints of fractured pastoralism in Not The Kind Of Jazz You Like highlight how light and shade and the demands they make can be successfully evoked as long as a band retains its individual identities at the same time as it reads off the same page, so to speak.

So regardless of what state the jazz industry is in, whatever the hell that is / was, the object lesson that it’s not always the most visible names who produce the most substantial music applies in abundance to this release, and thus encourages this still curious yet often wearied and dismissive jazz hack to keep on looking, and to keep the ears open.