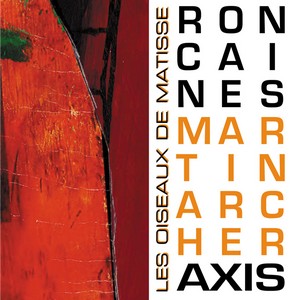 This vibrant and energizing recording has been forged from amongst many a seasoned hand spread across decades of British jazz, rock, and improvisatory music. Shepherded together from Discus label owner and saxophonist/multi-instrumentalist Martin Archer and ex-East of Eden leader Ron Caines, what you have here is music that feels somehow both urgent and contemplative, a revitalization of jazz morays that references elements of past masters while breathlessly ushering in contemporary vocabularies equally adept in the syntax of composition and on-the-fly performance

Les Oiseaux de Matisse (The Birds of Matisse) takes free flight right from the opening piece, “Haptic Space #1”. No, it’s not the freedom or interplanetary space found amongst later Coltrane, Shepp, or Ayler sides, but rather an introspective landscape populated by a shifting tableaux of sax and cascading, Keith Tippett-like keys. Archer and Caines merge seamlessly into a single unit here, the girth of which manages to transform itself into quite the heady brew as the disc progresses. Over the course of the eight-minute title track, Matisse’s flock is revealed as a gestating organism comprised of natural field recordings and the interpolative noises traded between Archer and Caines's near-telepathic synergy. The piece is a virtual hive-mind of activity, a bustle of skronk, piano-tickling, airiness, and earthy bass, a true and fairly literal imagining of febrile environments springing to life and boiling with molten fire. Where the band differs from so many of today’s improvising outfits lies in its ability for restraint, to allow the sounds to cohere and not degenerate into the typical morass of disassociated noise and cacophony that plagues many a post-modern effort. Nowhere is the compositional tools of the group more evident than on the album's centerpiece, “Nymphzurück”, over twelve minutes of expertly recorded music that calls to mind the ‘small/big’ band dynamics of Graham Collier and Don Ellis in one fell swoop.

This is readily apparent courtesy of Caines’ long-helding standing in late 60s British jazz and rock circles; his work with the aforementioned East of Eden helped to forge a distinctive hybridization of then nascent ‘prog’ modes shot through with the free-form and more abstract jazz tendencies a coterie of British rockers were initiating at the time. Though Caines and Archer provide the initial lines of attack, drummer Johnny Hunter's assured rhythmic poise guarantees the whole enterprise stays on the straight and narrow, allowing ample room for Laura Coles’s piano to dance merrily about the headspace, while Gus Garside’s double bass works its anchoring mojo with a subterranean pulse that borders on galvanic. The track belies a grace and beauty not often seen in the genre, a testament to the album as a whole and the combined experience of the performers involved; long may such an Axis reign.