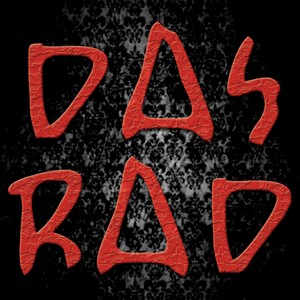 Well, guys, it’s clear, we play in the yard of very tall. DAS RAD is a trio, but each of its members alone is worth its heavy weight of respect and admiration. Let’s first mention Steve DINSDALE, who plays drums and sometimes keyboards in the mythical English trio RADIO MASSACRE INTERNATIONAL. Then Nick ROBINSON, an absolute ace of guitar loops, it is born, evolve and disappear at will, like a magician of sound. Last but not least, Martin ARCHER, an accomplished multi-instrumentalist, plays the saxophone, clarinet, flute or keyboards as well, performing at nothing less than ORCHESTRA OF THE UPPER ATMOSPHERE and COMBAT ASTRONOMY, and who, excuse of the little, also founded the label Discus Music.

So when three musicians of this huge caliber enter the same studio, we are already certain of the stratospheric quality of the result. And the content of this album is that one, twelve pieces rich, dense and exciting, from which stand out more particularly the two major and magnificent pieces that are Porto Steps and London Steps, whose duration exceeds ten minutes. All this is audacious, refined, often epic, sometimes fiery, always mastered, always excellent. Great art, really.

Steve’s battery initiates the movement and hammers the “beat”, Nick settles on the tempo and launches his curls, and Martin surfs on it and carries us with him in the musical skies. It is unstoppable while remaining continually stylish, “high british quality” requires. Styles succeed, add or mark their territories, rock, jazz, psyche, Berlin school, prog ‘, canterbury, electronica, or ambient, it is jostling at the gate and my faith is always good, very good. A bad electric guitar riff puts you down, a line of cosmic mellotron picks you up and takes you through the universe, that’s the basic rule.

As you can see, this album is a transmusical odyssey in twelve tasteful stops. So, if you like adventure, wow!, Bravery and top level musicians with all the achievements, do not hesitate; You will love !

Latest Discus Music release is Das Rad’s self-titled album (DISCUS 75CD) …this trio of players is Martin Archer plus guitarist Nick Robinson and drummer Steve Dinsdale, and they started it a couple of years ago just as a way they could have fun playing what they call “motorik music”. Drummer Dinsale has appeared on previous Archer projects, but guitarist Robinson is new to me. The plan is to sometimes work with arrangements and give themselves the discipline of a framework, while still hewing true to that spirit of free playing and improvising they love so well. Archer contributes woodwinds, but also keyboards and electronics, and though the nucleus of the band could be called a sax-guitar-drums thing, there’s evidently plenty of scope to lushen up the arrangements into something pretty fruity.

This is one of the more enjoyable Discus items we’ve heard for a while – pretty much in the mode of open-ended electronic rock music not far apart from some of your favourite krautrock and prog records – and sometimes edging into the same sort of fusion-ish territory as Gary Boyle, Association P.C., or Arte e Mestieri. Even the disk artwork is designed to resemble the famed Harvest label of the 1970s, home to everyone from Kevin Ayers to Quatermass. While sometimes this very melodic and accessible music may start to feel a little cloying and sweet if heard for long periods, the musicianship is exceptional, and it’s clear that all players are not just enjoying themselves but fulfilling a deep-seated need to make this kind of music. As ever with Archer records lately though, I find there’s just so much of it; the material could have been edited down to LP length to produce a much punchier result. But Archer’s generosity of spirit cannot be contained, and we all benefit from this largesse.

The track titles all have European references and themes, and this is intended as a protest against the “political and social insanity” that is Brexit. “We think of this as a European record by European musicians,” states Archer firmly. Music like this is the perfect riposte to narrow-mindedness and to those who would deprive us of freedom of thought; it’s a melodic advert for freedom.