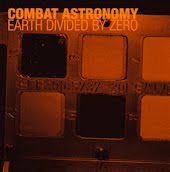 You don't really hear much about Combat Astronomy, except from us at Aquarius Records (do you?). Which is weird, 'cause this band should be a lot better known than they are, among fans of heavy and/or freaky music, considering they're already on their third (and a half, counting a split) cd release, one that has been long awaited, for a certain subset of AQ-customers in the know. For those not in the know, we'll say that basically CA sound like a Justin Broadrick or Kevin Martin industrial metal act (Godflesh or God, something along those lines) mixed up with freeform improv horn-skree, for results both brutal and beautiful. This band, or we should say this collaborative trans-Atlantic project, to be precise, is the unholy spawn of American sub-bass sludge technician Jamie Huggett and British improv reedsman Martin Archer (and friends). Thus they don't play live that often, which might have something to do with their low profile. They're self-described as an "intense hypnagogic industrial/jazz/prog/doommetal hybrid", and we can't think of any other outfit that better fits that mouthful. As we now know to expect, CA's new disc dishes out uber heavy doomic annihilation, bludgeoning with squelching bass and machine-like beats, the entire thing in fact percussive in its distorted rhythmic impact, amidst ominous organ and rising electronic drone. Yet CA also has a prog/classical side, thanks to Archer's woodwinds and also some female vocals, first introduced to this previously all instrumental act on their 2nd album Dreams No Longer Hesitate, returning here only wordessly, to eerie, avant garde effect. With that in mind, and all the heavy bass, Magma fans might find this to be their extreme sludge combo of choice. We'd also of course recommend Combat Astronomy to those who appreciate the likes of Painkiller, 16-17, Scorn, and even UFOmammut... And Earth Divided By Zero might just be their best disc yet, keeping the expanded palette of sounds found on their last outing, but leaving aside that disc's occasional surprise explorations of vocal (prog) pop song-ishness, instead forging a more organic synthesis of what we REALLY dig about this unit, the grinding low end and squealing sax skronk, the heavy rhythms and atmospheric, ambient-ish interludes. Not that it's without melodic surprises, like how track two tries to lull us with a placid piano intro, shades of Bohren Und Der Club Of Gore... but soon enough the bass and distortion attack is back in force. Punishing, but such sweet punishment. - AQUARIUS

Combat Astronomy really are progressive jazz metal though, actually they're doing… a lot of different stuff here, but it all works. In the mix are: choral style vocals, pounding rhythms a la Godflesh, electric piano and organ and jazz horns. It's got pretty parts, parts with pummeling industrial-style percussion and guitar, parts that are straight up avant jazz; alternately dense and ambient. This is one of those deals where I am instantly in love with it and want to get all the Combat Astronomy albums I can. This is a strong contender for my Top 10 this year. - TO ELEVEN

C the first time is horrible cacophony, as if the musicians shit his brains, and now carefully transferred the resulting product in the auditory range. Apotheosis - fifteen-The Atrocity Commission, where the music is happening and something called a hard, rather, we are witnessing a brutal cough saxophonist who had forgotten to remove the instrument from his lips, while the bass just tuned his guitar. However, if you give Combat Astronomy have fermented in his brain, then the next time you decide to storm this monolith, it is clear that the structure of the album, rigorous and transparent, but that was taken for the inarticulate sounds, in fact - a beautiful and graceful sequence music. Bass distortion - though the bit of the surgeon, which the usually-worker, picking in the frontal lobes of a patient until he puts the happy drool under anesthesia. Saxophone scalpel Combat Astronomy vzrezyvaet eardrums immediately obezbolivaya their piano anesthesia. If it were not for women vocalize, the head would have exploded under a pulsating pressure, as well - the blood drained from the cranium, giving a little head start before the bass will again be correct it and squeeze. Hedkrabno, mozgosliznevo, ushnoulitochno. - UNKNOWN ONLINE REVIEWER FROM RUSSIA

With the second album "Dreams No Longer Hesitate", the multi-instrumentalist James Huggett and his unit Combat Astronomy made a certain impression in the European counter-rock environment last year. Here, he presented an insidious and strong formula relating to the 70's Zeuhl, 80's noise, 90's doom and present time minimalist drones, mixed with free jazz of the renowned saxophonist/clarinetist Martin Archer, all topped by the confident but otherwise human voice of Elaine DiFalco from indie group Caveman Shoestore.The album then also is a continuation through strenghtening and perfecting specific aspects of the band's established sound.

And it all turns out to work - moreover it exceeds all expectations. From the wordless singing and into in the bass/drums/Hammond introduction of the grim opening cut ÇAstralizedÈ, via bent poly-rhythms under coarse fuzz strings and strangely well-sounding vocal phrasing in "Parallax of One Arc Second", to the monumental three-part title track, where extreme sonic considerations develop into a chaos contract between instruments and the impulses that influence. Huggett can hardly be accused of being special delicate, he reduces almost all sound matter into an essence that he funnels the music through (a bit like Guapo, Tarantula Hawk and Yeti before him, even though none of them sounded quite like this), and the continuous components - grinding and crushing bottom drive under odd rhythm coordinates, furious free solos on top, sudden quiet breaks over equally monomanic theme motives - are not wavering an inch on this disc.

Consequently, chances are that Combat Astronomy are just as happy to confirm the prejudices against them, but I personally would like to commend Huggett for keeping such a rare vision. Very few, if any, are making music like Combat Astronomy today. - TARKUS

Combat Astronomy's third ensemble release opens with a long haunting human call that seems to come out across a desert at night: echoing and morphing into the strange off kilter ritual of 'Astralized', a looping miasma of dubbed out horns, dervish incantations.

This hypnagogic atmosphere continues throughout the disc, an eerie otherworldly aspect and restless energy that often threatens to collapse the rigid grasp the nuanced drums and de-tuned tectonic bass have over the polyrythmic structures. The lyrical narratives of its predecessor "Dreams No Longer Hesitate" are gone, and when di Falcos vocals do merge are either indecipherable or phonetic: sometimes little more than primal screams, at other times layered choruses.

A continous dense wall of shifting sound, Combat Astronomy show possibly their highest level of stylistic purity so far - the sense 'otherworldly yet familiar' experience more akin to the primal landscapes of Zoviet France than the typical library references of extreme metal or free jazz. Like Tarkovsky's films, the music seems to communicate primarily with ones unconscious mind regardless of whether the conscious one is enthralled or repulsed.