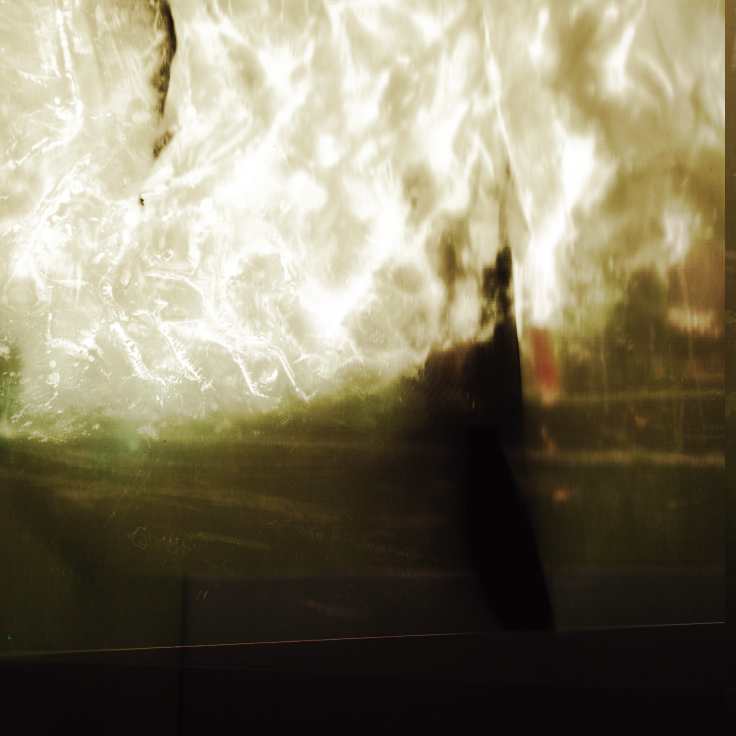 James Huggett has built on the power and creativity of his earlier work, refining the rock and jazz aspects that often coloured them, and produced his most focused and ambitious recording to date.

The Dematerialised Passenger is Combat Astronomy's second full length release, the first being the critically acclaimed but highly limited edition Lunik on the industrial label Adnoiseam several years ago.

Masterminding this cult underground act, James Huggett has built on the power and creativity of his earlier work, refining the rock and jazz aspects that often coloured them, and produced his most focused and ambitious recording to date. Huggett considers it a "breakthrough - I've finally achieved what I have been striving for musically for ten years"

The result is a relentless prog/zheul/industrial tour de force with some fantastically vocal and aggressive horn work against the grinding mid-tempo down-tuned bass guitars, odd meter drums and droning electronics.

Hypnotic and iconoclastic, fans of Guapo, Heldon, Circle and 'brutal prog' should check this out immediately.

"The dematerialised passenger is what you would get if Halo and Godflesh swapped blood with Ornette Coleman and half of the dudes on the altavistic label and then added a bunch of experimental ambient textures to the mix. To clarify, those are all good things in my book and I think this Combat Astronomy disc fucking rules. It sports some really nice cover art too, courtesy of prolific glitch madman Cordell Klier.
The rhythm and pace of the opening track, "Greedy Angels", is so jagged and spastic that at first I thought the disc was skipping. The drum programming on this track is fucking insane, and it takes some real chops to be able to do such a good job of keeping up with it. Most of the other tracks here don't have that same Ruins style evil prog rock vibe, instead opting for slow doom jams or mid tempo horn heavy groovesbut it all kicks ass.

I love everything here, but I guess I have my favorites. The textured doom of "Bad Phaser" really gets me off with its thick and ominous vibe and killer melodies, and I really enjoy "Orion", "Sulphur", and the title track a lot too. But like I said, I love everything here.

All of the tracks on "The dematerialised passenger" are executed with a simply amazing amount of technical precision, flow and ardor. I really can't do this record justice with words. Go check it out for yourself. Fucking essential." - Royce Icon, industrial.org

Musically the addition of the new members have taken the Combat Astronomy sound into some drastic new directions. Backing the once mechanical stuttering glitch compositions from the past are now thick layers of crunchy guitars, boisterous horns and spastic Jazz freakout sections. Some of the heaviest stuff can be found on the chugging Godflesh-like "Orion" or "Sulphur (Mercurated)." Both of these tracks contain a sort of "doom-like" quality mixed with funky Jazz-core elements.

I'm simply blown away by the complexity "The Dematerialised Passenger." The album is one of the best to come out this year for sure. Technically, the album is flawless, every song seems to flow perfectly within the construct. People always say that the sophomore release is always the hardest, but Combat Astronomy show here that they're more than up for the task of recreating and exploring new areas of sound without losing what made them so great in the first place. Fans of heavy guitar-Industrial music will love this album for sure." - Gunhead, Wetworkzeine.

"An amazing disc called "The Dematerialized Passenger" …which is like combining Mingus & Coltrane with Godflesh, except with drones galore instead of guitars - the disc is superb!" - Cordell Klier (Vedisni, Monstrare)

"Comprised of violent experimental jazz-prog suitable for the downtown Baghdad Barnes & Noble, this transatlantic (St Paul, MN/Sheffield UK) endeavor is ably powered by James Huggett's wounded-rhino abuse of electric bass, Martin Archer's mosquito-like sax-runs ("Collapsing Runways"), the mournful bassoon of Mick Beck ("Solar Guitars") and some clear-as-a-bell settling of the tiny studio itself - you can almost count the nails in the drywall in between the fits of rancor."- Eric Saeger, Movement Nouveax

This quartet features notables of the British jazz-improvisation scene, such as multitasking reed and electronics man Martin Archer, who also serves as the proprietor of this adventurous record label. Prepare your mind’s eye for a venture into a steely-edged and somewhat phantasmagorical joyride.
The artists’ bag of tricks is rooted within an otherworldly mergence of King Crimson-type bone-crushing rhythms, along with riotous jazz riffs. James Huggett generates some shock treatment with his blitzing and rather weighty e-bass attack. And with some industrial music overtones, the quartet’s pulsating ostinato rhythmic gyrations serve as a foundation for a sonic trip into the halls of doom. Take, for example, Huggett’s gargantuan fuzz bass lines, often enhanced by hazy electric guitar sounds and harrowing background treatments.

On “Bad Phaser” the musicians skirt the peripheries of minimalism amid a regimented offbeat topped off with a harmonious riff. Then, on “The Dematerialised Passenger,” they churn out a programmatic groove, underscored by Charlie Collins’ ghostly flute passages. The ensemble ups the tempo to coincide with Charlie Collins and Archer’s diametrically contrasting solo work as a sense of the macabre finds its way into the free jazz scenario. It’s a fascinating listen, indeed! (Exuberantly recommended…)" - Glenn Astarita, All About Jazz

"Heavy as plutonium this, like a 21st century incarnation of Magma's operatic "zeuhl" onslaught. Disjointed, pounding drum programs mix with deep, detuned bass riffs and electronic buzzsaw drones to create a relentless suite of industrial sludge-prog heaviness. In places...the listener is invited to enter a trance like state of submission, whisked down a tunnel of single minded rhythmic insistence where, like all good white knuckle rides, terror soon gives way to exhilaration. Archer blows up a storm over these otherwise implacable doom laden templates. Elsewhere...the horns work themselves up into a kind of symphonic death-pomp, providing an undeniable martial flourish: the sound of a terrifying, imaginary invasion" - Daniel Spicer, Jazzwise

"A grinding, rumbling distorto sub-bass death march with jackhammering machine beats... sounds kinda Godfleshy at first... but then, what's this? Heavy-duty blasts of saxophone, flute and bassoon?? Yes indeed, Combat Astronomy combine industrial metal with freaked out free jazz and prog, making for maybe the heaviest "jazz" record since Switzerland's under-exposed and now defunct 16-17 assaulted our ears with Gyatso back in '94. Yet there's also interludes of calm -- doomy passages of ambient moodiess with droning, multitracked reeds. And then it's back to the grind. The rhythms are punishingly mechanical, but also interestingly off-kilter. The weird timing adds to the sense of unease that's also built up by the squonky, skronky sax bleating and ominous electronics... Who's responsible for this brutal, beautiful madness? Well, Combat Astronomy's all-instrumental album The Dematerialized Passenger is a trans-Atlantic collaboration, built upon the foundation of the distorted bass, guitar and programmed beats of one Jamie Huggett from Minnesota USA, in collusion/collision with the saxes, clarinet, violin and effects of Sheffield UK's Martin Archer. Remember that Masayo Asahara cd we reviewed a while back? Saint Agnes Fountain, the supposed long-lost '70s Japanese minimalist drone-prog album that was actually the work of a current-day British musician? He's *that* guy. Two of Archer's pals join in on flute and bassoon as well. The results are likely to alienate all but the most adventureous jazz, metal, and prog fans...which is why we figured a lot of AQ customers might like it! Could certainly be a good one for fans of Godflesh, God, 16-17, Aufgehoben, Last Exit, Zdrastvootie, and other far out outfits on the extremes of industrial, prog and/or improv." -Aquarius Records

"This is a bit odd, but not so far out that comparisons can't be made. The promo lists it as "avant industrial rock-Jazz." I agree whole heartedly. What I hear is a really sludgy (down-tuned) rhythm driven experiment combining hard rock and lounge music in a thick heavy way and decorating the mush with flakes of freaky sax, violin, flute, and electronics. While a slew of underrated underground bands such as Godflesh or Sweet Tooth may have experimented with this kind of work, none have really made a big dent in the listening community (certainly not enough to chastise Combat Astronomy for trend jumping or unoriginality.) This is not a recording for this who like the traditional (guitar-bass-drum-singer) heavy metal line up. I think it is a release that could possibly be acceptable for both fans of metal and experimental music. If you ever find yourself entertaining such an awkward mix, you can be prepared." - Neo-zine

"Archer's cross-cutting saxophone trills and tongue slaps plus spittle-encrusted pops bring an avant-garde interface to some tunes, but industrial style and strength guitar reverb triumphs over all else. There are times when the saxophonist's reed bites almost resemble punker James Chance's attempts at Free Jazz, but Archer has certainly proven his superiority to Chance many other places. High octane performances and on a higher level than your average rock-fusion session ….. may only appeal to those who are keen on being bludgeoned by improv sounds." - Ken Waxman - Jazz Word

"Jazz with the attitude of thrash metal....a surprisingly different release for Discus" - Audion