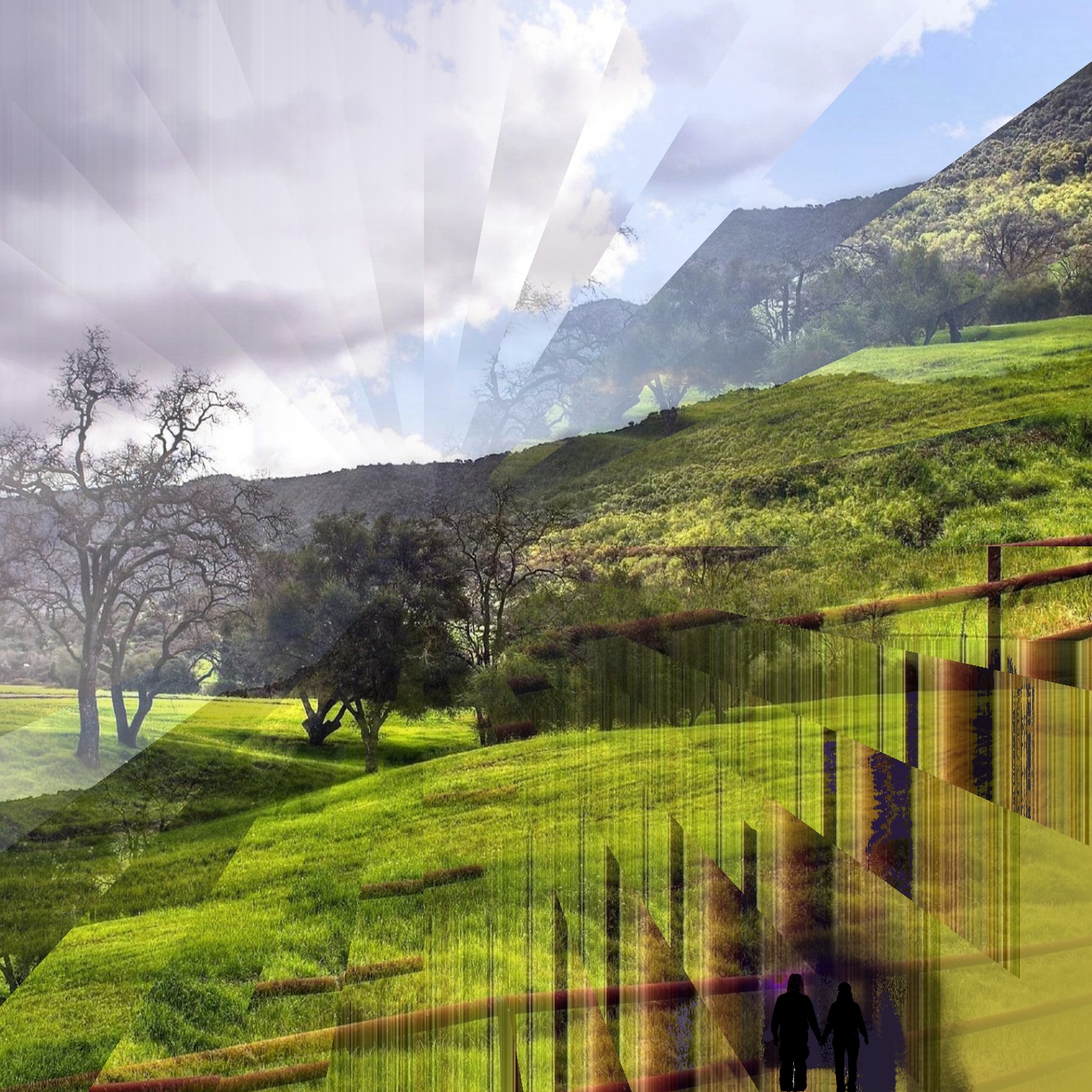 This music was realised variously between summer 2013 and spring 2015.

I’d recorded Bo’s performance poetry group O.D.D reading Echoic Enchantment in early 2014, and I knew straight away that I wanted to make a music arrangement, although at the time I never imagined that it would turn out to be such a large scale piece.

I began with the four percussionists, who perform a series of directed improvisations which I edited and collaged. Bo placed the voices therein to produce a skeleton structure.  I built the rest of the arrangement round that core, following a palindromic form:

This structure tends to be disguised by the sequential movement flow from area to area by the four percussionists, also by overlaps of the other material.  For ease of reference the CD is divided into ten tracks at strategic points.

Although the improvisation skills of all the players are at the heart of this music, the double bass and piano parts in the introduction and coda respectively are based on text instructions plus some simple ideas based on the rhythms of the voices, and both players improvise their parts in the two featured sections by reference to a single page score which provides five miniatures and melodies which can be referenced at any time.  The clarinet part is through written. Viola plays a double tracked free improvisation in the central section.

Where a good deal of Archer’s releases have showcased his skills / interests in jazz, big bands, vocal groups and electronic music, this one deserves to be called a serious composition, and has many viable correspondences with Stockhausen’s oeuvre. If there’s any doubt that Martin Archer is one of the more important and generally overlooked talents working in contemporary music in the UK, this release should be provided as Exhibit A at the annual courtroom trials that decide these things. If there were indeed such a legal agency, there’s a waiting list of cultural crimes that prevents progress on serious matters such as this.

I’d describe Echoic Enchantment as a wispy and sprightly percussion-heavy mood piece – slow to start, but once underway it dances with a grace which few 20th-century compositions can match, mainly because they’re all too often laden down with ponderous ideas from the self-important composer, then further hindered by a conductor who thinks he understands the work (but doesn’t), and an orchestra / choir who only care about getting paid. And then they get badly recorded too. Archer is fortunate enough to only work with friends and trusted colleagues, a rapport and relationship he’s spent many years of hard (and joyous) toil building up. When it comes to production of unusual scores like this, it’s paid off handsomely. Four percussionists, four voices (among them Julie Archer, who’s appeared on many recent Archer albums); three string players, a prepared piano, and the bass of old friend Simon H. Fell. A chamber ensemble of talented players, on top of which Archer adds his clarinet, organ, glockenspiel and live electronics. A strong, wiry sound, but also capable of supplying the grace and skill needed for this work, which has some quicksilver-fast changes and runs that you’d normally require from jazz musicians.

The work is based around Bo Meson’s poetry. He’s not only a poet, but a “metaphysician”, who leads his own improvising ensemble named after himself, plus a performance poetry group called O.D.D. He likes to flaunt convention with his contradictory ideas. In the press release he describes the “rain” theme that underpins Echoic Enchantment, and although it’s got something to do with an art installation project called The Rain Room created by Random International, Meson quickly loses me with his abstruse sentence construction and super-intellectual ideas. No matter, because Archer has been inspired. Archer wanted to build a music arrangement for Meson’s work, but it grew into something bigger than he originally thought it would, and while Meson’s text is present and correct, it’s only one aspect of this large-scale instrumental work, which is a mix of droning atonal strings, pattering percussion and overlapping voices, which plays for one hour continuously and is broken up into index points just for convenience.

Archer describes the structure of the composition in the sleeve notes; it’s something about a tight integration of percussion and voice, allowing him to add instrumental parts in what he calls a “palindromic” form; further elaborations about the construction follow. I am persuaded that these unconventional approaches to classical composition would have pleased Stockhausen no end; Archer’s primary thought is about practical, physical placement of the instruments and the musicians, before it comes to scoring. He’s said that the idea was “move away from jazz or rock genres to make a work whose format is contemporary classical,” with this release, but adds that he has produced and mastered it “as if it were a rock album”. It’s an astonishing and unusual triumph; even the cover is good, and harks back to 2008’s In Stereo Gravity to some degree. From 18th August 2015. – ED PINSENT, SOUND PROJECTOR

Visualised as a modern classical piece but sonically recorded as a rock album, “Echoic Enchantment” is a 56 minute piece composed by Martin Archer (Music) and Bo Meson (words), with both men contributing to the performance. Using strings, prepared piano, electronic treatments, percussion, double bass, organ and glockenspiel, the music has a vast and sprawling nature, the opening sections allowing the bass to build the tension until droning strings and percussion solidify the musical landscape allowing the words to dance between the notes. With some instrumentation based on loose structure and other improvised there is a delightful balance between flow and discord, the music having an vitality  and tension that lifts it from Minimalism into more Avant Garde territory suggesting the kind of music early Tangerine Dream would have made had they been an orchestra. With the words sparsely scattered throughout the piece it is the music that pulls you in, engaging, sometimes challenging, always interesting and fans of Cage, Stravinsky, free jazz or the music of Henry Cow and Slapp Happy may find much to enjoy. - PTOLOMAIC TERRASCOPE ONLINE