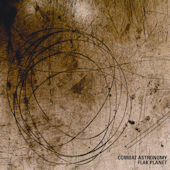 "Fourth album and another great, heavy one. As usual, this features band mastermind James Huggett on fretless, five string bass, churning up a heavy, zeuhl-based sound and also provding the drumming via computer programming (and doing a fine job of it too). This time around there are more guests on heavy horns and beyond: Martin Archer (organ, electronics, multi-saxes), Mich Beck (tenor sax) and Mike Ward (tenor sax, bass and concert flutes). Imagine a really heavy, Sonny Sharrock-less, Zeuhl-influenced Last Exit session and...well, it doesn't sound like that. But it is great and it definitely kicks out the jams! Instrumentally, their best ever, I think. Highly recommended."  - Steve F Wayside Music

"With the arrival of Combat Astronomy's fourth album, welcome once again to that unlikely alternate universe inhabited by us at Aquarius Records (and a few others too, like you?), where this intense instrumental outfit is as HUGE as their sonic footprint, their ultra-heavy hybrid of avant garde jazz and post metal industrial doom resounding planetwide in giant concert halls... if 21st century classical chamber deathjazz sludge were the next big thing, they'd be the biggest. Whereas, heck, in real life, we don't even know if they tour, probably not, since some of the group live in England, with another crucial band member based here in the USA. When they get together (however they do it) it must be a cathartic experience for everyone involved. As they say themselves about this album, it's "LOUD BASS LOUD HORNS LOUD DRUMS MASSIVE RIFFS" all the way. Well, with some quasi-ambient interludes, and bits of melody amidst the mayhem. But for the most part, thick drone, rumbling bass, punishing programmed rhythms, screaming horn blurt. It's kinda like if Godflesh were to record an album for Tzadik, armed with an arsenal of horns and woodwinds. Combat Astronomy use and abuse a variety of saxophones and clarinets, various flutes, bassoon, bass recorder, reindeer horn (?), along with fretless 5 string bass, organ, electronics, zither, tambourine... On Flak Planet, the formula has been perfected. The disc's opening track "The Stone Tape", is both cinematic and assaultive, it's jazz, but for the squelching sub bass and trudging jackboot rhythms. As the disc spins, there's outbursts of maniacal piano, jarring prog complexities, stretches of exotic atmospheric drone, and more monolithic thud. Brutal yet beautiful, as we've said before, for fans of 16-17 (natch) as well as, we'd bet, possibly PIVIXKI, Master Musicians of Bukkake, Ehnahre, and assorted RIO ensembles." Aquarius Records

"Do you like a little bit (okay, a whole lot) of metal in your jazz, or jazz in your metal? You’re not alone. The sound of the world being destroyed appeals to many, and it can take many forms. During the mid-1990s, there was a mini-wave of harsh, noisy, bass-obsessed stuff around that rattled, rumbled and throbbed like a furnace on the brink of exploding, with screaming saxophones (or farting bass clarinets) providing tenuous links to Mingus, Ayler and/or Brötzmann, and occasional outbursts of dissonant post-metal guitar. A list of the essential documents of this particular sub-sub-subgenre would include the following:

The sixth and latest disc from Combat Astronomy fits right in alongside these earlier monoliths of skronk and listener punishment, and adds a little bit of Meshuggah‘s stuttering, off-time brutality to the mix. Main dude James Huggett is the bassist and producer. He’s joined here by Mick Beck on tenor sax and bassoon; Mike Ward on tenor sax, bass and concert flutes, reindeer horn and drone flute; and Martin Archer on organ, electronics, zither, tambourine, sopranino, alto and baritone saxes, Bb and bass clarinets, and bass recorder. The drums are all programmed, but don’t sound it. They’ve got a tribal thump that’s very reminiscent of God, especially when the horns are surging around and the bass is creating wave upon wave of distortion and sludge. Unlike some of the band’s earlier work, there are no vocals. This is a good thing. Music like this should—and in this case does—come at you implacably, like a tank rolling over an endless road paved with human bones. Not everything here is based on the formula of massive bass + tribal drums + wailing horns = awesome. “Zona” features ritual flutes and jarring, post-Cecil Taylor piano, alternating with massive bass and tribal drums. But the heart of the album is a terrifically God-like suite, “Inverted Universe” parts 1-4, that sounds like whales surfacing and preparing for combat with man. The horns blare in repeating, hypnotic figures somewhat reminiscent of the fanfare sections of John Coltrane‘s Ascension, before the thundering beats and endlessly grinding bass throbs take over. Other albums by Combat Astronomy have been compared to Magma, but that group never did anything 1/16 this heavy. This is music designed to be played through speakers the size of walk-in freezer doors. And it’s viscerally gripping in a way very little music is these days." - BURNING AMBULANCE

Flak Planet is Combat Astronomy's fourth album as an ensemble. As ever, this outing sees the band stubbornly idiosyncratic, hypnotic and heavy. Combat Astronomy continue to achieve alchemical brilliance in their fusion of 70's influenced avant jazz and 21st century doom metal, producing something (yet again!) rather special and rather unique. The result is a sprawling, martial beast: kicking and screaming in its joyous fractal webs.

Huggett's overdriven double-tracked bass churns in complex cycling patterns of additive time signatures, locked with the intricate drums, never failing to conjure an incessant force wall of grinding poly-rhythmic groove. Danceable, yes, though probably for the disco at the end of time. The music asks you to submit to its ecstasy, uncompromising as it may be.

Martin Archer and his cohorts, Mike Ward and Mick Beck, cut through and soar over this super-sized grizzled rhythm section with a high energy brass and woodwind attack: often dissonant, but equally likely to erupt into surprisingly uplifting exultations that are bursting with questing exuberance. - CD UNIVERSE