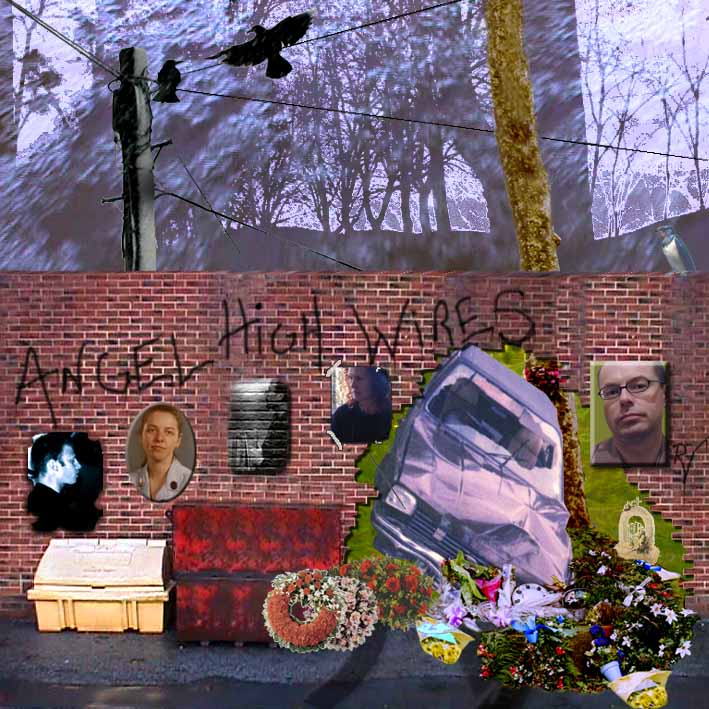 This is a landmark recording for me, as I've wanted to make a piece for voices for many years.

We began this project by listening to the entire Schubert lieder (21 compact discs) in a single sitting, and then tried to imagine how those sentiments and longings (songings) might manifest in a world where music has become less forgiving.The music structures were generated using improvisations by myself, Philip Thomas and Chris Cutler as source material, and were orchestrated with additional material by Chris Meloche, Charlie Collins and Mick Beck. I allowed Chance to play a substantial and, as ever, totally reliable part in the composition process. The singers, Julie Tippetts, Steve Roden, Sedayne and Rachel McCarron composed and arranged their own parts with a minimum of interference from me.

Firstly a thought on chance music, because AHW uses chance procedures probably to a greater extent than anything I've made for a while. If you're going to incorporate chance into your music, then it really has to be chance and not some edited and tidied version. So whenever I did use chance in helping with the music for this CD, I set myself the rule that you don't mess with the result. You leave it as it comes. That way you and chance get to trust each other. We're old friends now.

There are three procedures at work on AHW, starting with the Julie Tippetts tracks. This is where chance was used most extensively. We began with Philip Thomas' prepared piano. I asked him to improvise for an hour using various techniques. Sometimes we worked together, e.g throwing mini-magnets into the piano. Getting them out again was more difficult. I brought the resulting music back to my studio, and re-recorded it via effects and filters, changing the settings pretty much at random. I made 3 attempts at this, as the first version had too much hiss, and second was boring (I reserve the right to reject a chance work in it's entirety). All this was put onto a minidisk, which I then split into about 200 tracks, again at random. I then allowed the minidisk to play back in random shuffle mode, and recorded the results. Next I took the second half of this shuffled recording and superimposed it back onto the first half. The resulting 30 minute piece was then divided into four roughly equal tracks. No further edits were made. The first of the four was orchestrated by adding a piece made by Chris Meloche, in fact a reprocessed version of a piece called Low Pass from my "88 enemies" CD. The three other tracks were orchestrated with reprocessed Chris Cutler improvisation. None of these were edited in any way, but were allowed to sit in the track exactly as they fell. The coda of the fourth track was more considered, being Chris Meloche's reprocessed version of the music for the opening track on the CD. Finally, each of the four was prefaced (or ended in the case of the last one) with another short loop made by Chris. Julie Tippetts improvised her part live over these tracks, using no sampling but a little multi-tracking. Played-live flute and bassoon solos were added last.

The four tracks sung by Steve Roden were arrived at in a much simpler way. Three of them feature Steve singing over electronics-only parts made by myself. Steve composed the melodies, demo'd the tracks at his studio, and sent me his parts "dry" on CD. These were dropped back onto my original tracks, not always in quite the same place as Steve had sung them. Chris Cutler's part on one of the four was added later, repeating a loop he sent on CD. It somehow gives the illusion of being in time with the track, although in fact it isn't. Almost at the last minute, and after I thought I'd finished, I revisited these tracks and added to them what has proved to be my favourite part of the CD - the Roden choirs. These were made by running the original parts through a series of 3 harmonisers at once, altering the settings between phrases to change the harmonies, and constantly changing the wet/dry mix to give an organic feel. I'm not able to do all this with one pair of hands, and was assisted by my 2 children on this bit.

The four tracks sung by Sedayne and Rachel occupy a middle ground, being based on electronic parts by myself orchestrated with loops taken from the piano music on the Julie Tippetts tracks, more treated Chris Cutler material, and occasional touches of additional electronics from Chris Meloche. Mick Beck takes the only stretch-out instrumental solo on the record on one of these. I suppose that these tracks are the most conventionally composed on the CD, with Sedayne and Rachel spending a lot of time on workin out how to fit their melodies over the raging abstraction underneath. Having completed these, the drum part for track 8 was completely remade to give a more turbulent feel. I made this by recording Chris Cutler's solo onto my digital 16 track, then timestretching and timecompressing random sections on the left and right channels by different amounts (thereby disconnecting the stereo image), and finally re-recording it back to minidisk using the shuttle wheel of the recorder, to speed up and slow down. Again, the last minute changes are always the best ones.

Obviously, Geraldine's texts are the main element which bind and bring a consistency to the work, but the constant cross referencing of musical material also contributes. Finally, from the start I thought of this as a total work rather than 12 different tracks, and in orchestrating the individual tracks I also paid careful attention to the gradual accumulation of new events throughout the length of the CD. For example, I was careful not to introduce any woodwind until half way through, likewise prominent percussion until the second half, introducing Sedayne's crwth first and his voice only later, keeping the most extensive use of the "dramatic" Meloche loop until near the end. There now, I've given you all my secrets.

"Electronic composer Archer's music is always filled with surprises -- a consequence of his tireless experimentation with sound, his liberal use of chance elements in his compositions, and his rotating cast of musicians and use of unconventional instruments (bassoon, crwth, prepared piano, etc.). On this disk, Archer also works for the first time with the human voice, and the results are predictably stimulating.

This recording represents Archer's collaboration with poet Geraldine Monk, whose poems Archer has set to music. Veteran new music vocalist Tippets is typically on the experimental edge, turning her four songs into abstract but dynamic adventures in vocalese, trilling and wailing to the accompaniment of Archer's rumbling, stuttering electronic treatments. Tippetts offers the listener the greatest challenge, but also perhaps the greatest rewards.

In contrast, Steve Roden's pieces are both vaguely sinister and quietly beautiful. Roden's fragile counter-tenor, combined with Archer's electronic scores (which extend to ghostly enhancements of Roden's voice), are a study in contrast -- the poignant struggles of the human soul within a bleak, futuristic environment. Rachel McCarron and Sedayne combine on their four pieces, with Sedayne also playing crwth, a Welsh stringed instrument somewhat equivalent to a bowed lyre. These pieces are the perhaps most conventionally dramatic, although Sedayne's declamatory vocals may not be to every listener's taste. As always, Archer's electroacoustic treatments and blends of instrumental timbres and textures are fascinating in their own right - a provocative mixture of the random, the alien and the familiar." - Bill Tilland, BBC website

"The leading idea was to create an electroacoustic song cycle inspired by (or in reaction to) Schubert's lieder. The resulting songs share affinities with the contemporary classical art song and Archer's personal sound world. Dreamy melodies without a harmony frame, abstract electroacoustic pieces topped by words expressing strong, devastating emotions (rooted in Schubert's lyricism, the project implied a certain degree of pathos), these pieces are disquietingly charming. Angel High Wires succeeds in applying Archer's art to a different, song-oriented context, therefore making it as friendly an entry point to his work you'll probably ever find." - François Couture

"The songs are beautiful, evocative haiku-like structures, some describing scenes or emotions, others the fragmentary nature of pure dream-state, which fits the skittering, flighty accompaniment.... Special mention must be made of Steve Roden's voice, which soothes the parts no other Gregorian can reach" - Trevor King, Record Collector

"Marriages of improvisations to lyrical subject matter can often result in a mish mash of concept and delivery. Not so with AHW, a somewhat loose amalgam of verse and sound sculpture....Overall the disk is a symbol of restraint and cautious dialogue between vocalist and accompaniment. The composer's ability to gather disparate performance ideas is commendable". - Jeff Melton, Expose

"Extensive use of ring modulation and collage take it to the realms of Stockhausen-like opera....a challenging experience" - Audion