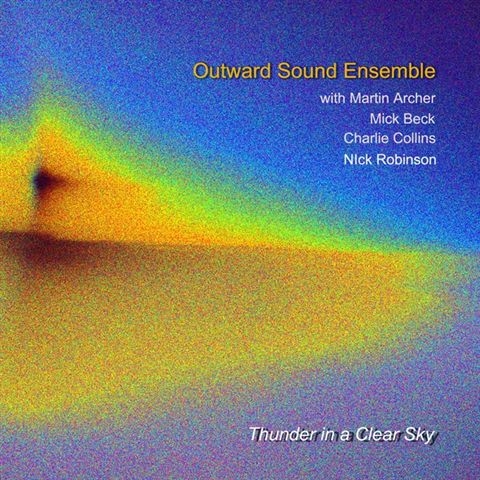 In early 2005, Martin Archer, Nick Robinson and Simon Robinson began plans to feature Canadian composer/performer Chris Meloche in his first live performance in the UK. The concert took place on Sunday, July 3rd at Over the Top in Sheffield. The evening was organized as three half-hour sets... 1) with Nick Robinson on guitar and loops, 2) with Martin Archer on software instruments, 3) with Martin, Mick Beck (bassoon) and Charlie Collins (vibraphone) and was committed to tape by Chris Trent. All involved agreed that the concert was a great sucess. Upon hearing the resulting recording, Martin Archer had the idea that Outward Sound Ensemble member Herb Bayley should contribute to the project. Bayley then overdubbed his sounds in real-time over the original performances. What is heard on this disc is the result of a trans-Atlantic collaboration of the OSE with some of England's best improvisors.

Herb Bayley and Chris Meloche first met in 1988 when Bayley played a concert with bassist David Lee. Since that time, the two have worked together on numerous projects in many diverse contexts. In 2002, they began their latest sonic venture which they call the Outward Sound Ensemble (OSE). Prior to their first recording session, they had their own visions as to what the end result would sound like, however, it was never discussed between the two of them. After recording the first piece, they sat down and listened to the pIayback. Both agreed that it was the way in which they had imagined the work to sound. Bayley and Meloche now refer to the resulting process as "real-time soundscape diffusion." Meloche first heard Martin Archer's music in the mid-1990s. In recent years, Meloche has contributed to a number of Martin's recording projects. Subsequently, he felt that Martin would fit in well with the concept of an OSE recording. After listening to a coupIe of OSE sessions, Martin recorded an hour of sounds using a manipulated violin set-up. Bayley and Meloche both agreed that this material would fit well within the framework of their soundscapes. In the studio, the OSE play live direct to 2-track digital tape. There are no synthesizers or samplers employed, only the sparse instrumentation listed. The recordings are purely "live" with no overdubbing or edits. There is also no mixing console used to balance the sound. All balance is obtained by the placement of the sound producing elements in relation to the stereo binaural microphone system. During the recording of this session, a violent thunderstorm began. The listener can clearly hear claps of thunder about three quarters of the way through the recording followed by the white-noise rush of rain on the roof of the studio and more thunder. This only added to the atmosphere of the session and recording did not stop. "Thunder in a clear sky" is a document of a special moment in time when all of the elements completely fell into place.

Chris Meloche is a Canadian composer who has been involved in the creation of electronic and electroacoustic music for nearly 25 years. His music has been issued on a number of record labels across Europe and North America (FAX, Silent, Etherworld...) as well as being broadcast internationally (including a commissioned work for BBC Radio). Over the years, he has worked with other artists including musicians David Lee, Gerry Collins and Brian Lambert, sound-poet bill bissett and visual artist Jamelie Hassan. His work has been supported by several grants for the Canada Council for the Arts and the Ontario Art Council. Meloche has also produced several projects with Herb Bayley over the course of nearly 15 years. In 2002, the pair founded the Outward Sound Ensemble as a new outlet for their collaborative sound-creation ideas

Herb Bayley (musician/producer) has worked in nearly all areas of the arts for over 25 years. His artistic life began as a trombonist, which lead to work in community radio as an announcer and eventually as a freelance producer. As a producer he has worked in radio, live recording, theatre, video, dance, poetry, performance and visual arts as well as new media. Highlights include the founding of 'Sunfest' one of Canada's largest festivals of World Music, creating 'Radio Ethos' Canada's first volunteer-run community-based Internet radio station and co-founding 'Open Air' London Ontario's largest Public Art exhibition. As a musician he has worked and recorded in a wide variety of musical settings including big band, jazz, rock, punk, improv and electroacoustic music. Classically trained, most of his professional work has been in jazz and improvised music and has lead to long term partnerships with clarinetist Tom Lenehan, guitarist Lloyd Garber, saxophonist Eric Stach and his twin brother saxophonist Randy Bayley. One of his most fruitful collaborations is with composer Chris Meloche yielding, over the course of 15 years, numerous innovative and diverse projects. Their current collaboration is the Outward Sound Ensemble in which they are developing a new sonic vocabulary they call "soundscape diffusion". This new vital open language is the stimulus for a vast array of future projects and collaborations with many other art forms.

"A heady, slightly fugitive sound that interacts with ambient noise and physical processes to create a very intimate, introspective atmosphere that never stops reshaping itself, making for an impressive release" - Brian Morton, WIRE

"This British/Canadian aggregation intertwines mechanized avant-garde improvisation with loops, horns and other tools of the trade for a recording that presents astonishing realism. Recorded live in U.K., trombonist Herb Bayley subsequently overdubbed his parts to consummate the end result, resulting in this CD.

Martin Archer employs software instruments to create gentle sound swashes amid the hornists’ concise blurts and sound-sculpting maneuvers amid Chris Meloche’s prepared table-top guitar extrapolations. It’s often difficult to discern who is doing what; therefore, it’s a seamless collaboration of future thinking musical minds that offers spacious, multidimensional effects. I listened to this recording several times through a set of high-end Grado headphones and the overall sonic/mood-evoking experience is stupefying. Minimalist themes and phrasings seemingly ping pong from different angles, creating the sensibility of actually feeling the music emanate from within. The waves of sound and contrasting tonalities generate a vibe that is all-encompassing. It all comes at you from divergent angles, where time and distance present an intriguing variable." - Glenn Astarita, EJazz News

"This collaboration....centres around the presence of Chris Meloche's table-top guitar: less a musical sound than a mechanical process, like the whir of distant engines. Pitted agiant this broad featureless terrain, Martin Archer's software manipulations evoke chance encounters with other life forms and robotic intelligences, while Beck's bassoon and Bayley's trombone summon up snuffling, drooling creatures of the imagination. It's a gripping journey, too tense to qualify as an ambient soundtrack, owing more to the textural investigations of pioneers such as Keith Rowe. The overall impression is rather like descending slowly down a monstrous elevator shaft into the bowels of the earth, passing floor after floor of dimly lit, scrabbling activity, infernal workshops and secret slaughterhouses." - Daniel Spicer, Jazzwise

"Cosmic, broody stuff not too far away from AMM or Morphogenesis" - Audion

"A series of performances with great depth and some profound off-the-wall music" - Martin Lilleker, SANDMAN

Started by trombonist Herb Bayley and prepared-guitar-player Chris Meloche in 2002, the OSE moniker embodied the spirit of their new venture; a means of taking things further, with the assistance of fellow travellers along the way. On the occasion of July 3rd 2005 Chris Meloche, Martin Archer (software), Mick Beck (bassoon), Charlie Collins (vibraphone), and Nick Robinson (guitar and loops) performed 3 half-hour improvisations at the Over The Top in Sheffield. Later, at Archer's behest, Bayley played along to the tapes of the show. What you have here are the resulting recordings - a trans-Atlantic collaboration. Remember the days when you'd send cassettes of your recordings to a mate in another country, then he'd over-dub his own part, and tapes would go back and forth? That spirit of exploration with the 'other' is evoked here. Distance and time lines are broken, location becomes an intangible. Acoustically, it is very much a recording made within a room. It has that quietly pleasing sound of being enclosed. Things occurring within a room, but which room? The one Bayley was in or the one the others were in? It also calls into question the idea of a 'live album.' Of course there is no such thing. A recording is by its very nature not live. Play it again and it is identical to the first time (despite your ever changing perception.) But the process by which this album was made accentuates the irony of nothing being less live than a live album. And it's all the better for it as it plays with the concept of what is 'live' (albeit without intentionally.) These surprising, drifting, electro/acoustic improvisational soundscapes have a subtle surrealism to them. Dark, moving and yet underlined by a glide. There's just enough grit to form a pearl. At times the metallic glide was reminiscent of Coil's How to Destroy Angels, at other times it hinted at the playfulness of early NWW. Perhaps that's misleading but it shares those worlds. You can even hear thunder and rain in the background. All this surrealism (no, realism!), appropriate then that one of the titles is 'Breton's Aquarium.' Aurally an unusual release for the Discus label, but very much a kindred spirit - Hassni Malik, Irrational Arts