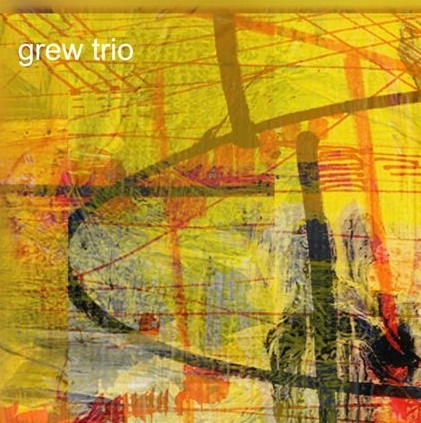 Beautifully captured studio recording of this long standing trio with each musician playing at the height of their powers.

Winter 2005. Drab dark days. Grew Trio in a studio with an expert and sympathetic recording engineer, intent on doing something different. An evening to set up, a day's work to build up, then the first feel of spring growth and the urge to reproduce. It's morning, time to make things be counted. Fertility, spark, energy, nurturing. Creativity caught: five years' development of the group with its present members. Eight pieces blending persistence and diversity.

Opening with the title track, a compelling tympanic piano-percussion duo, track 2 has almost a theme and variations form with a neurotic bassoon. Muscular grunting as part of track 3 possibly suggests the wish to be off To the woods (track 4 which is contiguous) where some very atmospheric things happen. Tracks 5 and 6 are also joined (bassoon percussion duo which has a hungry feel, linking to interesting cave and little beasties textures. Track 7 is a well sectioned and intense free jazz revel, and track 8 ushers out the session in a lighter playful mood. A fascinating tale all round.

Three quarters of an hour of pretty intense stuff. Enjoy!

"The give and take is palpable but, frisky byplay notwithstanding, they always seem to hold something in reserve, resulting in sturdy, cohesive structures" - Wire

"When the definitive history of British improv is written, it'll have to include a chapter on the Sheffield scene, Discus records and the activities of musicians such as the Grew Trio. This release carries the hallmarks we've come to expect of that stable: an uncompromising and intense approach to non-idiomatic free music, delivered with an irrepressibly mischievous sense of humour. Marks' percussion sounds at times like someone empying the contents of a pencil case over a drum kit, at others like a disconsolate husband rummaging in his garden shed; Beck's bassoon runs an ornithological gamut from menacing goose to keening gull, from snoring albatross to over-excited penguin; while Gre seems just as happy tinkering in the innards of the piano as hammering out dense thickets of chords. Only on "Midnight Revels" do they come close to producing anything classifiable - scorching free-jazz pushed along by Beck's post Ayler tenor sax. Ridiculously entertaining" - Daniel Spicer, Jazzwise

"Grew’s percussive approach to the piano is at the heart of the project. The opening track starts with a relentless piano piece that sounds like it has been commandeered by a small but very enthusiastic child before bass notes create a rolling thunder of sound. Beck’s amazing dexterity on the unwieldy bassoon takes over next. He’s also at the heart of Getting Hungry, creating, along with percussion, the sound of a very very empty stomach. There’s something prehistoric and sludgy on the sparse For Stalactites. Midnight Revels is the closest to jazz with huge percussive rolls of piano and fireworks all round from Beck’s sax and Marks’ percussion. The album closes with Nightfall, a very quiet piece until somebody manages to locate the lift." - Martin Lilleker, Sandman

"Wrapping this album (or any other Discus product) in smugly acquiescent verbage like “deconstructionist experimentalism” misses the mark and crashes on the landing strip. These old buddies explore bonked instruments and make a toddler’s mess, yes, but this is also a measurement of the members’ personal levels of – get ready – telepathy and their abilities to give non-verbal cues. Never a dull moment with profoundly nonconformist dada like this." - Eric Saeger, Skope

"Grew...is an attacking pianist, wringing notes from the keyboardas though working to shape intractable material. His affinity with the comparably vigorous approack of Beck was soundly established with the duo recording Picture August. Beck doesn't cling to any musical comfort zone. His occasional switches from fractious tenor sax to woody bassoon sounds like his response to an expressive challenge rather than a quest for novel timbres...Marks is a restless presence, adding surface variegation to a gritty encounter." -Julian Cowley, Wire

"Part of the intimacy can be ascribed to the band members’ five-year history together and their many tours. Not that this is the members’ exclusive improvising outlet. Part of Manchester’s free music scene for nearly 20 years, drummer Marks is also a member of the band Bark! with guitarist Rex Casswell and sampler player Paul Obermayer. Beck, who recorded a fine duo session with Grew on Bruce’s Fingers, regularly plays with drummer Paul Hession and bassist Simon H. Fell. As for Grew, whose keyboard voicings here sympathetically focus on clarity and melodic episodes, he’s a former visual artist, whose move to Lancaster 12 years ago convinced him to redirect his energies into music. Since then he has developed own language of scales and patterns, created music for a dance company, and played with saxophonists as different as Lol Coxhill and Andy Sheppard.

Although Grew’s piano is frequently as prepared, pulled, and propelled as Werchowska’s, when using conventional techniques, he defaults towards hyper-kinetic, almost boogie-woogie and stride configurations. In some cases these melodic fills are used as a base on which to counter the snap of Marks’ drums or his cymbal resonations. Other times rapid cadenzas rattle the soundboard as well as the keys. Duetting with Beck’s tenor saxophone, Grew’s jumping external keyboard arpeggios and plucked wound internal strings bring forth double-tongued undulations and muscular, split-toned grunts from the reedist.

“Good form and a bit of ankst [sic]” introduces rococo harmonies from the pianist as Beck, playing bassoon and whistles, snorts bull-moose cries from one and rooster-like crowing from the other. Darting back and forth across the keys, Grew’s response is high- frequency mainstream chording and wavering pulses. Throughout Marks clanks and pops different parts of his kit using the occasional rim shot for emphasis. Impressive as all this is—especially when Beck punctuates his solo with irregularly pitched split tones and a few mouthpiece kisses—the three seem to be improvising in broken octaves, parallel rather than in unison

More memorable are the three penultimate tracks—“Getting Hungry” and “For Stalactites”—which run into one another, and the second-to-last “Midnight Revels”. Eerily reprising the heights of energy music, the last piece showcases snorting tenor saxophone lines studded with repeated double-tongued groans and split tones. Rocketing to altissimo pitches and diving to glottal growls, the reedist’s zeal is equaled by Grew, who after a few showy glissandi pumps out flowing cadenzas of curlicue lines. Meanwhile the drummer rolls, rebounds, and stays out of the way.

The connected preceding tunes build up from a combination of swiftly tongued foghorn-like tones from the bassoon and buoy-marking ratchets from the percussionist. Polyphonically, it soon seems as if Marks is cuffing and agitating his bass and smaller drums while Beck tongue-stops and shatters phrases, finally squealing double reed timbres that soar from altissimo to sopranissimo at full tilt. Grew enters in the second of the double-barreled numbers with strummed phrases and hesitant single notes reminiscent of a similar strategy used by minimalist John Tilbury. By this point playing on the rims and sides of his drums, Marks’ subsequent bell-ringing and snare-bumping provides the perfect coda to Beck’s expansive honk that climatically shreds into internal squeaks." - Ken Waxman, One Final Note