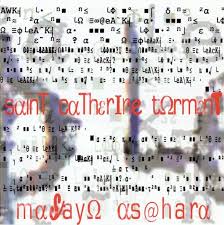 Shades of Stockhausen and Galina Ustvolskaya, but with that distinctive Asahara minimalist touch. The 60 minute span seems to pass in a quarter of the time.

Following the runaway success of her re-released 1974 album "Saint Agnes Fountain", we're pleased and proud to present a new full length piece by this radical and farsighted composer. This is a 60 minute work which Masayo has created from source material played by Martin and Philip. Archer's atmospheric and varied improvisation has been orchestrated by Masayo with piano samples which are by turns agressively insistent and delicately shaded. Shades of Stockhausen and Galina Ustvolskaya to our ears, but with that distinctive Asahara minimalist touch. The 60 minute span seems to pass in a quarter of the time.

"On this, Martin Archer continues the perpetuation of his Japanese female alter-ego hoax – and ascribes unto her this hour-long composition called St Catherine Torment. Philip Thomas played the prepared piano, Martin Archer played the violectronic, and the resulting bad-tempered and fragmented electro-acoustic composition was edited by Asahara. It starts with piano plucking from the lower register, almost resembling Cecil Taylor in a bad mood with both hands tied behind his back; but since the work is dedicated to Stockhausen, mentor of many, then perhaps Klavierstucke is a more appropriate model. There's added percussion and very spare electronic instrumentation, phweeps and groans.

By index point 8, it's become something more of a cosmic and echoey electronic workout for the violin instrument-thing. Don't except Tangerine Dream, though – this is modernistic, atonal and cerebral music, a good effort to deliver a convincing update on the Darmstadt school. Soon, the plunking and jamming is really 'in the groove', combining piano with live electronics in a striking mixture. In fact, the musical tunnel we're led down here is very narrow indeed. It obstinately ploughs a single furrow and relentlessly denies any form of enjoyment, for the most part. It's a long set of very insistent, nagging and monotonous music, which could easily drive you up the wall on a bad day, but I have to admit I do like this rather curmudgeonly side of Archer than his more altruistic, friendly approach. Not that we often see the latter.

The overall tone of frustration and inhibition continues, mounting in intensity, and you notice how the prepared piano has that blocked-in, cut-off and muffled sound, all adding to this sense of ineffective communication. All of this means it takes some time before the 'Wheel' of the title is actually set in motion. It may happen somewhere around index point 17. Before it starts to spin, there is a lot more 'torment' to get through, mostly of the aural variety. The worst of and the best of Cage and Stockhausen, all provided in one handy pouch of minimal grumbling."- Ed Pinsent, Sound Projector

"Minimalist Japanese improvisational work made primarily through a more percussive than usual approach to the piano and some other tidbits floating in the atmosphere around it. I'd say that there is actually a lot here for minimalist work. It sounds more like an atonal freeform that verges on noise, but stays delightfully within the realms of music through the sheer spirit of experimentation and a stretched concept of "on the spot composition" being the muse of choice. I love that the CD cover states "Please don't worry during tracks 15 and 16, your CD player is probably going to be fine." Mine is doing just fine." - Neo-zine

"It's not surprising that it's in part dedicated to Stockhausen, as Masayo's use of filters and sound direction is clearly indebted to the German master. an interesting release" - Audion