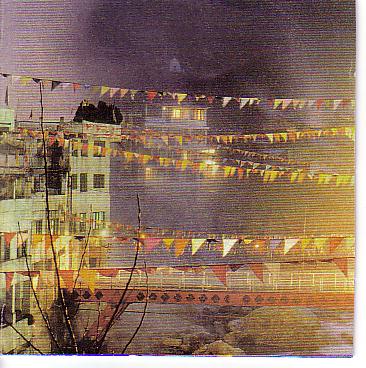 Listen to a compilation of extracts

Archer and Jasnoch reunite for a second release as ASK. This time there are some full on jazz elements - emphasis on solos rather than collective improvisation, a realtime rhythm section and composed parts for a meaty sounding full horn section.

Following on from 1998's Disconnected Bliss, Archer and Jasnoch reunite for second release as ASK. This time there are some full on jazz elements - emphasis on solos rather than collective improvisation, a realtime rhythm section and composed parts for a meaty sounding full horn section. Yet at the same time there are many non-jazz elements - the usual creative studio collage work, field recordings, noise and textural sections, plus some very upfront synth sounds.

We think we've made a real jazz record for the 21st century.

The formulary of curses

A senseless act of beauty

"ASK have made one of the essential jazz records of the decade.....they cover an astonishing amount of musical ground without ever losing coherence and focus.....work that's microscopic in detail.....a masterpiece" - Duncan Heining, Jazzwise

"A diagram shaded with menace.....their numerous points of overt and tacit musical reference indicate options rather than obligations.....After repeated plaus it remains resistant to reductive summary. That inbuilt resistance is itself a statement of value and intent" - Julian Cowley, WIRE

"Exceptional for its irresistable rhythm and cornucopia of sonic effects..... The musicianship is breathtaking, the sound processing reflects deep contemplation..... Take your ears on an adventure holiday." - Vic Allen, Artscene

"Six years after their debut CD, the duo release a belated second offering. While Disconnected Bliss had been put under the sign of Richard Pinhas/Heldon, The Formulary of Curses main reference would be Soft Machine, despite the presence of tributes to Edward Vesala and Roscoe Mitchell. The trademark nasal organ of Mike Ratledge and the angular melodies of prime Softs (circa Third and Fourth) are almost everywhere and especially in Watercourse and Strawberry Blue. That's not the only surprise on the album. Song for Roscoe Mitchell is a very respectful pastiche of the Art Ensemble of Chicago's music (with a touch of Arkestra in the demeanor). The remainder of the album oscillates between pastoral tunes and recomposed free improvisation. All these reference points get blurred by the use of electronics, electroacoustics and various forms of recombination. The core of the music consists of John Jasnoch's guitars (including a lot of ud) and Martin Archer's keyboards, electronics and saxophones. Archer's usual suspects are brought in whenever the music claims it, from Simon H. Fell and Rob Dainton forming a jazzy rhythm section, to Charlie Collins, Simon Pugsley and Derek Saw turning into a Softs-like horn line. Collins, Chris Meloche and Chris Bywater (Archer¹s partner in the ambient duo Transient v Resident) contributed to the 10-minute Pods by reprocessing a handful of sopranino sax and ud duets. Compared to Disconnected Bliss, this album feels downright schizophrenic. Encompassing Archer's most difficult concepts (the same kind of composition with unrelated free improvisations and recombined elements one can hear on his solo albums) and leanings toward jazz-rock and free jazz, it pushes and tugs the listener in all directions at once. Definitely not an easy listen and much more diverse and confusing in terms of moods, approaches and references, The Formulary of Curses ultimately has a lot to offer and reveals its own sense of unity to the patient listener." - François Couture, All-Music Guide

"Five years into the 21st century, British composer/saxophonist Martin Archer must occasionally allow himself the odd smile of satisfaction. Beginning his career in the early 1980s as a improv saxophonist, by the mid-1990s the Sheffield-based musician immersed himself in creating relationships between electronics, technology and improvisation. Integrating random events and sound material into his recorded work before that idea become generally accepted, early on his partially notated/partially improvised sound collages showed the sort of musical maturity that it would take others years to attain. The formulary of curses is the newest chapter in his ongoing saga, and it’s particularly noteworthy for several reasons. For a start, the 13 tracks, which feature up to seven musicians and a variety of multi-tracking and electronic extensions, now fit comfortably within the electro-acoustic improv genre -- one of the defining styles of this century. Furthermore, by reintroducing his reed playing into the mix on several pieces, Archer gives the CD the kind of jazz-like lilt that many more ponderous experiments lack. Centre of the program is Archer on sopranino and alto saxophones, bass clarinet, recorders, keyboards and electronics, plus his longtime associate John Jasnoch on electric and acoustic guitars, ud, mandolin, lap steel, tenor banjo and “field recordings”. Added on various tracks are Derek Saw on tenor and baritone saxophones, fluegelhorn and cornet; Simon Pugsley on trombone and trumpet; Simon H. Fell on bass; Rob Dainton on drums; and Charlie Collins -- who is part of a long-standing duo with Jasnoch -- on flute, clarinet and sound processing. Additional sound processing comes from Collins, Chris Meloche and Chris Bywater. Probably the most perceptible view of how Archer operates is on “Pier Groups”, which only involves Archer and Jasnoch, and “Song for Roscoe Mitchell” which features all the instrumentalists. Built upon a field recording of a train arriving on a Southend pier, the former track features an urban pulse that is soon intercut with the bucolic tone of Archer on recorders and Jasnoch on acoustic guitar. The effect is as if a couple of medieval minstrels had wandered out of Sherwood Forest to concertize on a grimy concrete street. As the tune continues, repetitive note clusters from a legato bass clarinet meet up with the delayed pulsation and snap of electric guitar lines. As citified and rural tones succeed and often mask one another, the aural picture created is of Eric Dolphy circular breathing in the midst of a Masque performance. For its part, “Song for Roscoe Mitchell” suggests what would happen if an organ trio and a riffing Stax-Volt horn section were added to one of Mitchell’s more funk- oriented composition. Usually known for more cerebral work, here bassist Fell keeps the groove going, while Jasnoch’s flayed guitar timbres move through standard blues changes into ringing distortions. With the guitar soon trading licks with the vamping horn section as it reprises the theme, Dainton lays on a shuffle beat, as space is made for an artesian well-deep ‘bone solo from Pugsley, plus Archer duetting with himself on sopranino and alto. Without pause, the piece finally melts into the pure noise essay of “A Senseless Act of Beauty” which is the final track. Other compositions cycle through a panoply of references from rock music, traditional British folk ballads, modern and earlier chance music, atonal interpolations and outer space chants. That means Jasnoch especially, is charged with creating the fragmented finger picking of folkie Davy Graham at one point or the tortured, whining lines of bluesman Freddie King elsewhere. Archer meanwhile, can produce a West Coast sax line so cool that it nearly freezes the laser on one track, yet use the delay properties of processing elsewhere to output calliope-like tones. Off-kilter percussion sounds, jazz shakes from the brass, wild animal chirrups from the reeds, a re-imagining of distinctive improvisation on the ud -- or oud as most spell it -- and all sorts of shifting electronics also make an appearance The plectrumist’s background playing bluegrass and country music also means that a track like “Strawberry Blues” is only blues if the songs of mountain banjoists like Dock Boggs are included in the canon. Featuring the deep pitches of synthesized sound processing, it’s what would result if a WSM Barn Dance was held at IRCAM, a European centre of electronic research. Also illustrative is the aptly named “Pod” where stacked, multi-layered sopranino overblowing faces the watery pre-recorded sounds of French conversations. Archer calls this “the most technically complex piece on the record”, yet like good software the end result works well without having to know how the radically structured piece was created. This session and Archer’s other CDs are only available online at www.discus-music.co.uk. Making the extra effort to find it will allow you to experience the music of someone who has created an unique soundworld though concept and experimentation." - Ken Waxman, Jazz Word

"I like what I'm hearing here.....the real surprise is the spontaneity that is retained through all the electronic processing. This isn't grandpa's jazz!" - Neo-Zine

"Often I'm reminded of the early recordings of Music Improvisation Company, AMM, or the most outwardly bound improv Henry Cow. Out there and radical indeed." - Audion

'…Curses'' vocabulary dips into English avant prog textures (catch the Frippian /Frithian six-string on 'Watercourse') and Carl Stalling-shaded cartoon squawks and screeches that seem to invade the InaGrm studios in 'Mirny'. Changing the mood somewhat, a Ron Geesin-like library music sepiatone fields a poignant recorder melody amid the everyday hubbub of a busy railway café in 'Pier Groups'. The set's most towering peaks though, must definitely be 'Strawberry Blue' where mutated trails of Mike Rateledge-toned organistics (circa. 'Soft Machine 2') encircle a lone tenor banjo recital and 'Song for Roscoe Mitchell' whose exuberant big hand signatures somehow echo "the two Mikes", Gibbs and Westbrook, in their prime - only this is a far wilder proposition. Great! - Steve Pescott - TERRASCOPIC RUMBLES

Formulary. Now there's a word. It makes your mouth go funny. For their second album the multiple instrumental work centring on Martin Archer and John Jasnoch play with electro acoustics, glitched and processed sounds, combining them with wind, string and brass instruments. The breadth of play here is wide. Splutter and gloop, highly articulate jazziness and funny tweaks go to make one hell of an colourful album. It somehow treads the line between being angular and melodic. I like it when the horns are up and at 'em. Rob Dainton's free flowing drums are phenomenal. There's some great but understated (the mix?) interplay between Dainton and Simon H. Fell. Others on here include Derek Saw, Simon Pugsley, Charlie Collins, Chris Bywater and Chris Meloche. Oof! What a line up. No wonder they've ended up with a dynamically lucid album. Some tracks are composed and some are improvised but all have a very exciting energy about them even during the quieter and spacious moments. It's an exceptionally enjoyable album. It breaks genre restrictions, transgresses time lines and takes in a lung full of clean air. Here we start anew. Hold on for the audacious 'Song for Roscoe Mitchell' where they go all Big Band for the AACM. The grand finale of the album, 'A Senseless Act of Beauty' is an appropriate way to end things - an extended fragmented collapse. - Hassni Malik, Irrational Arts