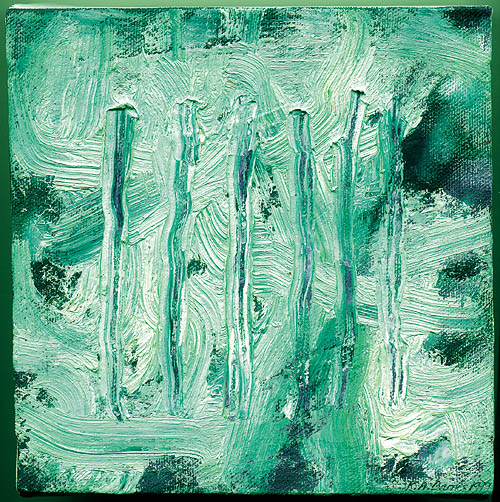 Listen to a compilation of extracts

Fluvium is the second CD collaboration by Archer and Monk. It was originally conceived as a live performance work for the duo, but this recorded version adds virtuoso vocal orchestrations by Julie Tippetts.

Fluvium is the second CD collaboration by Archer and Monk, following on from Angel high wires. It was originally conceived as a live performance work for the duo, but this recorded version adds virtuoso vocal orchestrations by Tippetts. Unlike Angel high wires, which is mainly sung, in Fluvium Geraldine's own spoken performance of her text takes centre stage.

After a shimmering instrumental prelude, the first part concludes over an ominous drone, which is picked up by an almost African sounding ostinato in the second section. The work then moves into faux pastoral territory before concluding with the violently pointillistic Metablethers. Completing the disk is a related but separate composition, Aftershock, featuring a dramatically multi tracked Julie singing over electronically scrambled spoken word (again from Fluvium) by Geraldine.

Abandoned moon buggies.
Fly-blown.
Will soon be cold.
As cod.
Is.

Drifting cells.
Interior war.
All out creation cluster.
The city has reached it.
Weakend.
Fluvium.

A flutter and slump of leaves
to the floor the book had flew
and out fell the condemned sentence:

turning
a breeze
into the next world
wild

The daisy is not for turning.

"Geraldine Monk's poetry activates words, makes them events rather than hollow vessels for received understanding. They play, clash, spark and rub up against one another in unpredictable ways with unforseen consequences. Archer's stylistic flexibility suits such a project, chasing the utterance, keeping it company and enriching it......Haunting." - Wire

"At its core, Angel High Wires, Martin Archer's first collaboration with writer Geraldine Monk was a song cycle. It's follow-up Fluvium drops the idea entirely. The first album featured a cast of singers interpreting Monk's poems. This time around, the poet herself recites, emphasizing the phonetical plays contained in her words, pushing them toward the sound poetry of Sten Hansson. Of the original singers only Julie Tippetts remains. Her vocal improvisations are laced with Archer's bubbling electronic textures, some quite harsh, and saxophones. Angel High Wires kept a certain degree of separation between voices (the melodies) and electronics (the accompaniment). Fluvium on the other hand is a piece fully integrating its elements into a single whole and thus comes much closer to a radio play. The title track is presented in four segued movements, for a total duration of 30 minutes. The epilogue Aftershock (13 minutes) pushes integration one step further as Monk¹s voice is heavily treated while Tippetts soars in an overdubbed vocal extravaganza. This album is surely more challenging and abstract, but it also engages the listener on a deeper, more disturbing level. The real star of it is not Monk's words or Tippett's voice, but Archer's talent at constructing puzzling yet sleek and surprisingly sexy sound pieces." - Francois Couture, All-Music Guide

"An elaborate listening experience.....the 'spoken/poetic' sections are well balanced and sufficiently abstract to allow them to merge with the music if you don't want to focus.....textured and intricate with many strands to explore" - Ampersand Etcetera

"Brimming with subtle surprises" - Glenn Astarita, All About Jazz

"A postmodernist arcadia of limitless transformations.....A glittering set of variations, quite unlike anything else in music" - Ben Watson, Hi-Fi News

"Fluvium is the second collaboration between Archer, poet Geraldine Monk and singer Julie Tippetts (following the electroacoustic song-cycle "Angel High Wires", also on Discus). It is not a "poetry-and-music" disc as much as a collaborative composition using as its materials music, speech and the singing voice, a carefully constructed sonic artefact - but architectonic metaphors are all wrong for a disc so fluid in texture, which pushes so gradually but inexorably into the condition of estrangement. The piece occupies a zone "wayafter aching midnight" (the phrase appears several times during the piece), pushing past the point where emotions and wounds are fixed and communicable, so that Monk's words and Archer's music give the impression of carrying an emotional charge that is no longer easily determinable and can't be put in words. As David Kennedy remarked to me, to venture "wayafter aching midnight" is to step beyond "a kind of threshold into a world that is at once terrible and beautiful. And sometimes the beauty and the terror are external and sometimes from inside the self." The piece opens with deliquescent, will-o-the-wisp electronics; Monk's first spoken sequence is a set of "abandoned whisperings", the words virtually impossible to make out but having that peculiarly threatening quality that urgent whispers possess. This leads to a shimmering and undulating soundscape and a spoken passage which evokes fin-de-siècle spiritualism - a séance "Ina dark-dark". Violent, echoing knocking - "Rappa rappa. / rappa rappa" - suggests that the answer to the desperate question "Is there anybody there?" is yes, but the piece trails off just when a response seems about to be made. The searing metallic sound - like the infinitely stretched-out ring of a cymbal - that opens "Fusile" seals off this line of inquiry: we return to the abandoned whisperings, now spoken. The scene they evoke is chill and desolate - at once a moonscape and a decaying city. Tippetts enters over silvery melodica, her melismas a wordless lament as threatening or angry as it is sorrowful. The nocturnal landscape of the section (think of the entire piece as a gloss on the musical genre of the nocturne) is broken open by a violently inarticulate passage which brings both women's voices to the fore. The intrusion of "LIGHT" is a shock, a moment of illumination delivered in tones that begin in wonder and end in scorn and anger. The next section, "Ghast", is bathed in the soothing computery wash one associates with the background noise on a spaceship, with Monk's text an oasis of calm, an alcohol-induced bubble of suspension where "time dripped unnoticed / ~and~then / ~and~then / it stopt." But the soothing wash and the words begin to disconnect, pried apart in violent slow motion and culminating nightmarishly as Monk reprises Macbeth's panicked cry at seeing Banquo's ghost: "Take any shape but THAT." By the mysterious logic of opposites that seems to be in operation, there is an epiphany at this moment in the piece, luxuriant and suspended, given rhapsodic voice by Archer's soprano saxophone while Monk's words take a more agonized path, repeatedly snowballing out and swallowing themselves without reaching their destination. Their image of spiritual release is at last articulated and then immediately cancelled with a stutter: "ghosts(g)hosts)of(o)the(de-ad)ded)return / (turn)to(t)torment(torm)the(e)already / (ready)tormented(ormented)". The concluding "Metablethers" clears away the fluid nocturnal soundscapes and epiphanies of the preceding sections. Its fitful spasms of knocks and pings (their timbre suggesting both metal and wood) have a harsh and ugly clarity. As Monk puts it, we are in a zone of "The paranoid knock. Node. / Colourless noise. / Electro-bacterial dis / ease....". There's a wild, angry energy here in Monk and Tippetts' vocals, finding outlet through motion, dance, song and shout: "at breakneck / reel the roosh / it came / O / pen M / Outhed / Yip!" Monk's final words are a lullaby, but one delivered with such a mix of tenderness and scorn, menace and bitterness, that this is no pat resolution - no surprise then that the piece concludes with echoing danger-signals and electric-shock percussion. In the disc's coda, "Aftershocks" (a separate piece derived from "Fluvium"), Monk's words emerge in tiny unintelligible fragments like bubbles rising to the surface and popping; even more unnerving is the unearthly swarming of Tippetts' vocals, in a music that suggests dreams and nightmares: at once horrible and beautiful, fascinating and repellent." - Nate Dorward, Paris Transatlantic

After their artistically successful collaboration on Angel High Wires, this second album has opened out their sound....poetics combine with Archer's by now reassuringly confident use of disparate instrumentation to form a unique soundworld. Geraldine's spoken work is centre stage, and Julie Tippetts' vocal orchestrations and Archer's accompaniment neither encroaches on nor distracts from the clear view of her voice....I've had a hard time working out why this album is so effective....it's convincing and moving....it's been played dozens of times and each time it's like being played for the first time. And I don't know why. A mysterious and rewarding album - Progress Report

The first Archer/Monk collaboration Angel High Wires (la Cooka Ratcha/Voiceprint 2001) also featured the glorious Julie Tippetts, but to a lesser extent as one of several featured vocalists. Here her role could still be mistaken as being secondary to that of the main duo, particularly because this time she is not the narrative vocalist rather a vocal (as instrument) orchestrator, and often her contributions are deep in the background if present at all. But her influence has shaped the whole project such that she truly deserves to be credited as a collaborator proper. Despite the obvious continuity between the two projects Fluvium stands as a stark contrast to Angel High Wires for several reasons. Firstly, there are no additional musicians in the mix; space is the order of the day. Secondly, rather than using guests Monk here recites her own texts. Thirdly, Fluvium's text is a continuous form; the four titles (not counting the fifth track which truly is an "Aftershock" and stands as a separate companion piece to the main body of work) are best considered as "index points" to help break up the sometimes difficult journey. The result is a piece of music/poetry/soundart that sounds complete and fully formed in both its concept and execution. Archer credits "electronics" as his main instrument on these releases though he still adds a bit of sax (and other conventional instruments) now and then. His style here is deep into avant-garde jazz territory, or probably more accurately jazz-tinged avant-garde if you want to be particularly taxonomically anal. Percussion is notably absent, creating a fluid open environment for the three to explore. Monk, to quote the British Electronic Poetry Centre, writes "atmospheric narratives gleaned from the coincidences of circumstance and the emotional geography of place." Her bio continues, "I want the physicality of words to hook around the lurking ghosts and drag them from their petrified corners." Yes, beware! this is modern stuff, yet Monk's genius lies in her ability to arrange words and phrases, along with carefully (mis)placed punctuation into flavourful text-forms, the same way musicians such as Archer, or Robert Fripp arrange Concerts without a formal template to create a textural and emotive sonic environment. Richly effective these words can be, if the listener can find the right space. And then there's Julie Tippetts. Despite their modest presence her vocalisations throughout act as a complement to reinforce both Archer's and Monk's contributions. Through considerable restraint and empathy she forms an integral bond within this union of three. She is the voice-instrument linking the instrument to the voice. Without her this would be poetry set to music. With her it becomes a genre in itself. This is a grand work, not a portfolio collection. Highly recommended. - POINT MOOT