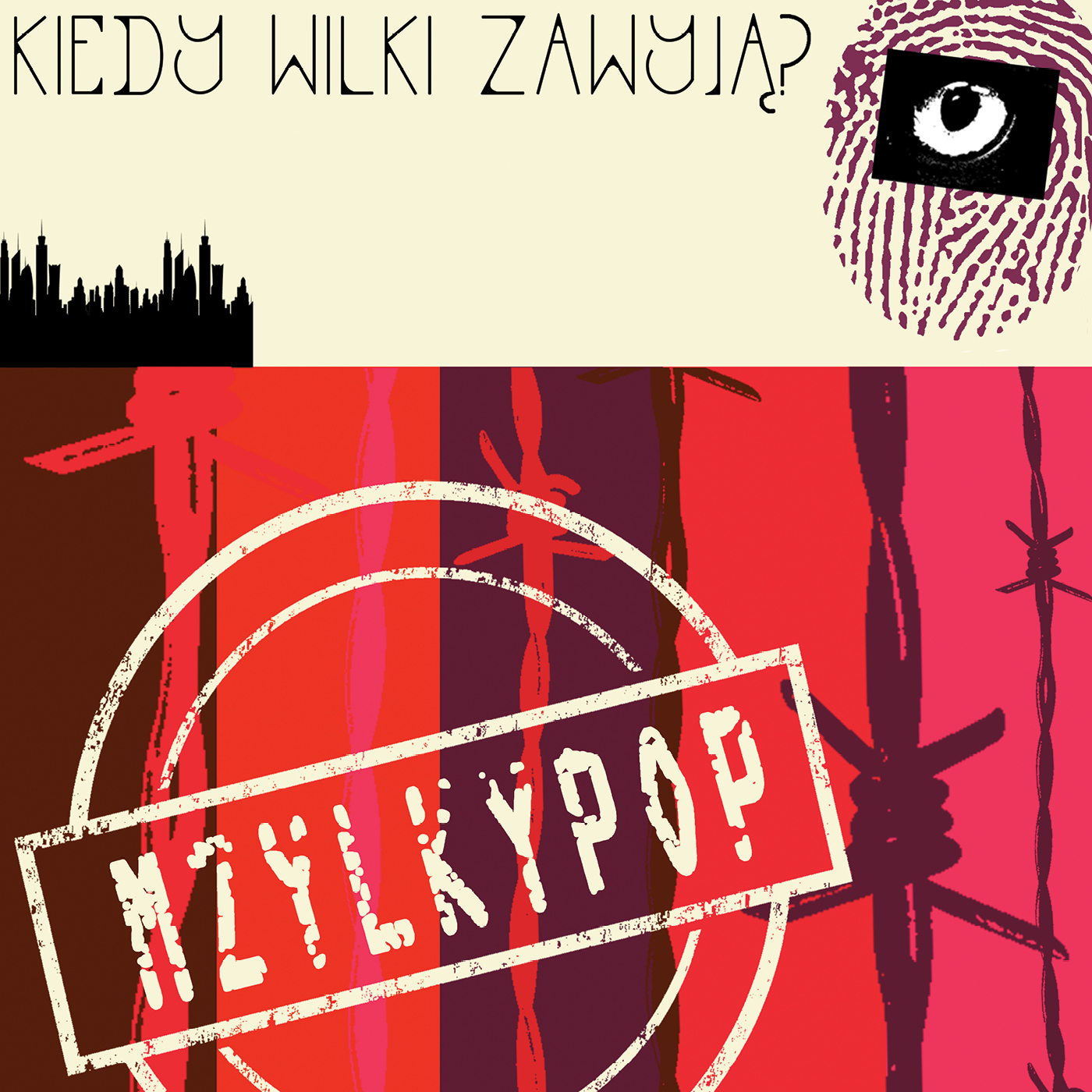 Please note that this release is available as CD / DL / or LP.  The LP edition is pressed on red vinyl and limited to 100 copies only.

Myzlkypop gives us with “a work of fiction pre Pandemic, pre Referendum” where avant-pop from Zappa to Ze Records shines through this meticulously crafted song cycle, played on vintage instruments and uniquely voiced by Sylwia in an entirely European voice that is cliché free and commands the song.

The sentiments expressed are still prescient and dear to my heart. Many catalysts not least spending decades as a gun for hire writer/ musician since the heady days in Detroit working with Was ( Not Was) until I could resist no longer and decided to do my music my way with zero compromise or commercial consideration. Meeting Sylwia Anna Drwal by chance at the Audacious Art Experiment gave me the voice. An entirely European voice that is cliche free and commands the song. Kiedy Wilki Zawyja? When Will The Wolves Howl? - Mick Somerset June 2021

"This feels like you’ve pushed past bric-a-brac and moth eaten furniture at some market in an obscure French village to shuffle through old trash 70s vinyl to discover a lost, unheard, psychedelic masterpiece. One with all the mystery of a forgotten time and place but one strangely undiscovered, a lost continent of … well I’m not sure what, but it’s beautifully weird and wonderful.  I’m writing this on Halloween, how perfect. An album that reeks of real Gothic, damp dark and macabre, not faux Primark Goth fancy dress and pumpkins but genuinely unsettling. It could sit alongside any Giallo – Italian noir horror – without discomfort. I could run this behind The Wickerman and get a proper sense of what was going on - raw buzzing, not folktronica but something much more unsettling with added hormones and creepiness. Like Jodorowksy’s Holy Mountain relocated to a dark and nocturnal Eastern Europe.  But this is a record with spit and polish, beautifully composed and produced: clearly crafted with love and attention, but built on shifting sands. It travels from brittle funk, somewhere between the body movement of the Contortions and peak madness Ornette Coleman, to wash up gently on Nico’s Desert Shore. Enmeshed in there is mutant soul, David Axelrod on a sabbatical and oddly Gregorian incantations. A voice from another dimension glimpsed through dark veils, I feel I should be burning some esoteric oils and throwing flickering projections onto walls.  Past worlds aside this is a future we could be turning our backs on… I wish everyone could have played this record before the referendum, we wouldn’t be pulling up the shutters."  - Stephen Mallinder

There are other words that precede it but, as is right and just, the first proper word on Mzylkypop‘s Kiedy Wilki Zawyja? is “Kurwa”. Which you’ll recognise as being the most popular swear among Polish people. The record details a fictional dystopia in the 2030s, but there’s a clear tension around the now of the UK — lyrics interchangeably in Polish and English, narratives about immigration and dispossession. For the most part, my Polish isn’t strong enough to discern the Polish parts beyond the odd noun like boga and ubrania — but my partner, who’s from Gdańsk, popped her head into the room to say that it sounds well Polish. I’m not sure what that means, but I think it’s possibly because there’s a strong narrative to the music — it’s still jazz, in a sense, but it’s also jazz-informed arrangements. Like bleary fairground music or some ersatz lounge, distended in service of something most gothular. Possibly most surprising, and pleasing, is Kiedy Wilki Zawyja? this is a cohesive, well-formed and well-arranged set of songs that are all over the place — there’s patches of rackets, free jazz-y sections, stuff that sounds distinctly like folk plainsong (replete with recorders and all). And yet the record is over and done with in about half an hour — which is to say, not an ounce of fat or bloated over-egging. Seemingly the record is the composition of Michael Somerset Ward, who I’m sure older readers will remember from Clock DVA, but there’s a lot about this record that feels pulled together by Sylwia Anna Drwal‘s vocals — hers is a new name on me, so I’m hoping to hear more soon. For my money Kiedy Wilki Zawyja? is a record that leans into the post-Brexit shiterland that is the UK, and does so with quiet observation and humour, rather than anything too garishly signified. Top marks, Mzylkypop, bardzo dzięki. - Kev Nickells, FREQ

An atypical record for Discus Music. An album of ‘pop’ by Mzylkypop, a Sheffield-based duo of Michael Somerset Ward (keyboards, electronics, percussion, electric and acoustic woodwinds) and Sylwia Anna Drwal (vocals and narratives). From what I could deduce, this collaboration is already a few years in existence. This album is, in fact, a rerelease of a very limited vinyl edition that first appeared in 2018. Ward was once a member of Clock DVA and worked with Floy Joy, Was (Not Was), etc. Drwal was a member of the Sheffield band Mother of Crows. She is Polish of origin and sings in Polish and English. They present a series of 10 songs, all made up of a well-defined sound concept. Overall the music has a psychedelic atmosphere and a bit of weird character. The vocal performance by Drwal, who sings mainly in Polish, is impressive. In a folk song like ‘Slumber Pin’, she sings in English. ‘A Narky Monkey’ strongly reminded me of film music from the 70s. Most material is written by Ward, except the closing title ‘TV Lives’ written by Don Preston for GTO’s first and only album from 1969. Exemplifying that the 70s are the primary source of inspiration. Not only Zappa but also Suicide and Chrisma came to my mind. Many influences are absorbed here, resulting in a robust set of dark and bizarre songs using old vintage instruments of the 60s and 70s. The song format is dominant with experimental and free intros and interludes in many of the tracks. A very consistent album of imaginative music.  - Dolf Mulder, VITAL WEEKLY http://www.vitalweekly.net/1303.html

Wild, wacky, wonderful, and so, so, out there. The utterly uncategorizable and strangely coiffed Mzylkypop isn’t just one of the more idiosyncratic releases in the Discus catalog, it’s one of the most richly rewarding pieces of warpmusic you’re likely to hear this year. Ostensibly a duo, the pair of Michael Somerset Ward (ex-Clock DVA and Was (Not Was)) and Sylwia Anna Drwal have drafted some additional heavy hitters to help in actualizing the maximum density of sound and vision that oozes out of every millimeter of this recording. Pianist Matthew Bourne, drummer and mellotronist Jarrod Gosling, percussionist Charlie Collins, and a gaggle of others provide key contributions to the album’s ever-kinetic momentum. From the opening breathless minutes, when Drwal ushers us in with the sinister whisper “This story was born in my imagination…”, you’re sent plunging into the heart of the rabbit hole that is “Witch Drones/The State”, a rough-and-tumble tussle of careening electronics and amassed percussion moaning like the whimper of whipped dogs. From there things get, well, twisted in the extreme. Ward’s deft electronics, achieving the kind of symphonic lift-off unseen in his ‘dayjob’ as part of synth-dance outfit Crooked Man, smack up against his own corral of electric and acoustic woodwinds, breezeways of tornadic ferocity embodied in Drwal as she vents her inner Dagmar Krause with demented glee. In rapid succession, the collective traipse through a forest perilous of mutant, Transylvanian prog, faux Gentle Giant-isms, chamber music as envisioned by the likes of Steven Stapleton’s Nurse With Wound, et al, a veritable storming of the studio by any and all devilish means imaginable. Echoes of music occupying the outer limits of the rock spectrum—the likes of Art Bears or Tuxedomoon spring to mind—flit conspicuously throughout, but Ward and Drwal are too inventive to summon any of those ancestral spirits wholeheartedly; they act more like particle accelerators buttressing the firmament, a fulcrum upon which this dynamic duo pivot. In the end, descriptors become meaningless, influences get lost in the mayhem, and you’re left to your own devices, exhausted, exhilarated, and punchdrunk from this lot’s sonic brandywine. - Darren Bergstein, Downtown Music Gallery

The DISCUS MUSIC releases usually were very experimental instrumental complex jazz orientated, but the re-release of the 2018 album Mzylkypop of KIEDY WILKI ZWYIA? is something entirely different. It’s not as Polish as you might expect with such a bandname, because the duo consists of the British musician Michael Somerset Ward on keyboards, electronics, percussion, electric and acoustic woodwinds, and Sylwia Anna Drwal on vocals and narratives. Michael started his music career in the band CLOCK DVA, while in later years he signed up for a solo career to VIRGIN RECORDS, worked with DON WAS for WAS NOT WAS and one of his songs was covered by ALISON MOYET (Weak In The Presence Of Beauty, which ended up being a massive hit). Although he did a lot afterwards, he now fully returns to the music business with this rather interesting release he did with Sylwia. Besides these 2, the other featured musicians are Simon Lewinski - guitar, keyboards, Philippe Clegg - bass guitar, Jarrod Gosling - drums, mellotron, Peter Fairclough – drums, Charlie Collins – percussion, Matthew Bourne – piano, Maartin Ornstein – tarogato, Peter Rophone - bass guitar, Beatrix Ward-Fernandez – castanets, Cath James – viola, Wolfgang Seel – vocals and Milan and Maja – voices. Musically speaking there is a lot to discover here, but I do think the progrock and ZAPPA fan will mostly be interested in checking out this album. A song like Slumber Pin is celtic influenced, and is a beautiful calmer CLANNADish piece, while for example the superb Sylwia’s List draws influences from 70s psychedelic rock. There’s however some really cool progressive rock to be heard a lot of times, such as during Last Train To Lublin and Red, White and Blue, while ZAPPA freakiness and 90s alternative rock meets a bit of jazz (and did I hear a sorta JAMES BOND melody during A Narky Monkey) is also part of the game sometimes. It’s a melting pot of a lot of things, but thankfully it’s always sounding melodic and refreshing enough to keep up the interest from start to finish. Without a doubt this is an album you need to listen to a couple of times before making up a good judgement. It is definitely one of the finest releases on the DISCUS MUSIC label so far. - STRUTTER'ZINE