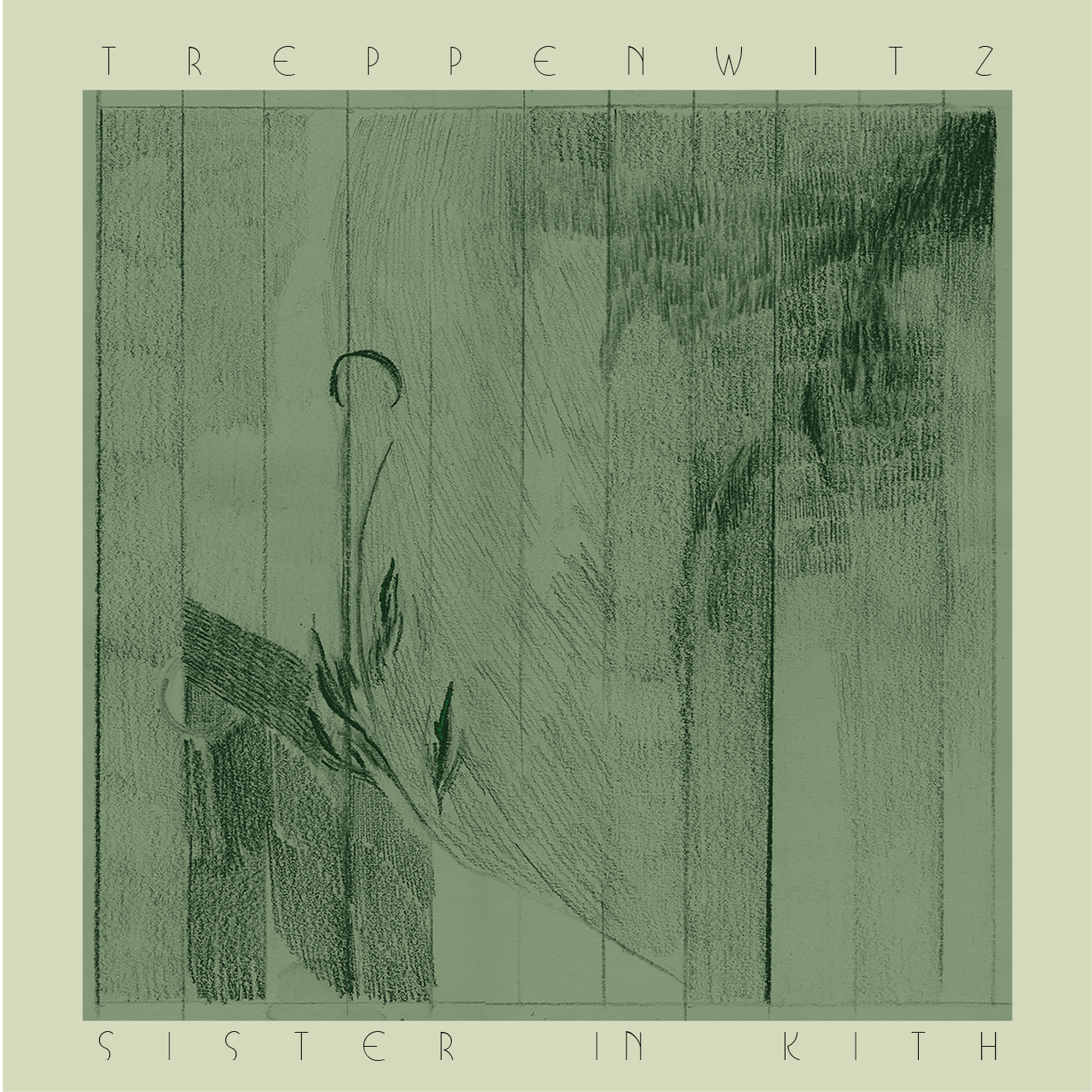 sister in kith is the third album from Treppenwitz, the latest chapter in an ongoing story. The band set up with microphones in a living room; the engineer pressed record and they played. There was no separation between the instruments, and the audio has almost no post-production treatment. The results are startlingly immediate. sister in kith is simply the raw sound of these musicians, on that day, in that room, and the stunning audio quality seems to almost ignore that fact.

This organic ethos is equally present in the music. sister in kith demonstrates Treppenwitz's commitment to improvisation – which is to say, their commitment to using the present moment, the here and now, as the medium by which they dive into the unknown. Songforms are used a point of departure for explorations of sonic texture, harmonic sonority, rhythmic interplay and spontaneous interaction; sounds are configured and reconfigured in a deep dialogue of piano, bass and drums.

Influences come from far and wide. sockeyed / loose laces is a meditation in Bartokian rhapsodising; dream of a common language is a child of Paul Motian's rubato ballads; sound logic / sound magic is a roguish nod to Anthony Braxton; brimful is surreal Ornette swing. The final track, a mackerel's tale, featuring special guest Nel Begley, spins a narrative about a woman who metamorphoses into a sea creature. The end result is an album which is willing to borrow from anything and everything it can to achieve its aims.

This piano trio embraces multiple aspects of the improvised music tradition, resulting in music which is equal parts explorative, lyrical and explosively wild. In every performance, the shapes and contours of the music develop organically; different every time, always seeking. The sound is steeped in the free jazz of the 1960's, but the music can and does go anywhere: the blues, high modernism, celestial spiritual vamps and European folklore are all part of the family.

TREPPENWITZ - Sister in Kith (Discus 105; UK) Just when you think that the standard jazz piano trio concept is, to paraphrase a Brian Eno maxism, “a dead fish”, along comes something to shake your beliefs to their core. Treppenwitz aren’t mere one-hit wonders, however; this is their third go-‘round at reinventing legacy and subverting cliché, and damn if it doesn’t come to a frothy head on this buoyant long-player. Pianist Matthew Aplin for one is armed with the art of improvisation but his influences are tougher to pin down; he can tickle the ivories with the same furious abandon and tonal diversity as Keith Tippett throughout the nine-minute run of “Sound Logic / Sound Magic”, but as the piece’s second half proceeds, settles down into a more probing, methodical discourse that can be positively Tyner-esque. Bassist Tom Riviere plays with a jocularity that is equal parts bravado and bluster, whether keeping straight time across the post-bop shuffle of “Brimful” or marking out his territory with a pronounced and strident pizzicato across “Watching the Arc of Bats”. Drummer Steve Hanley makes quite the brash noise, tumbling down the proverbial stairs on the opening salvo “Staircase Stomp” or knowing how to cymbal-ize his kit to achieve the most dramatic effects, particularly as he maps out contours on “Sockeyed / Loose Laces” for his comrades to follow. No matter its component parts, Sister in Kith is a synergistic effort through and through, oscillating from serenity to free expression with an alacrity that belies this young trio’s collective years. - Darren Bergstein, DOWNTOWN MUSIC GALLERY NYC

The quality of both the music and the audio is quite remarkable.....This a hardly a jazz piano trio in the traditional format although throughout you do get snippets of this classic style. Overall this is a fine album of contemporary improvised jazz drawing on the past masters but spinning its own take to produce a relevant offering for our times.  - Steve H, Bebop Spoken Here

Treppenwitz is a trio of Matthew Aplin (piano), Tom Riviere (double bass) and Steve Hanley (drums). This trio from Leeds started in 2015 and is led by composer and pianist Aplin. They debuted on New Jazz Records with ‘Short + Long Ditties’ in 2016 and did intensive touring in the UK. With ‘Sister in Kith’ they present their new material for Discus Music. Five compositions by Aplin and three by Riviere, all developed in the years 2018-2019 and recorded on two days in 2020. To my ears, their music is first all jazz, with influences of other idioms. The opening track ‘Staircase Stomp’ is the most playful piece of the record. Accelerating at one moment, slowing down at another, with jumpy up-tempo movements. The following track ‘Sound Logic’ is built around a funny joyous melodic theme played by the pianist. Halfway it turns into a slower and more introspective part with double bass in a prominent role. This introduces also the atmosphere and mood of most of the remaining tracks. ‘Watching the Arc of Bats’ is a very peaceful and reflective work. ‘Brave to swim in this Weather’ is a likewise introverted piece, as is ‘Dream of a Common Language’. In contrast, ‘Brimful’ is an up-tempo swinging piece. Starting very innocent, it chooses halfway for more free and complex manoeuvres.‘Sockeyed/Loose Laces’ is a contrapuntal work. With their open-structured vehicles, they give way to an intimate and stylish performance. In the closing track ‘A Mackerie’s Tale’ there is a guest appearance by vocalist Nel Begley. - Dorf Mulder, VITAL WEEKLY

Leeds' trio Treppenwitz takes a more Sixties Jazz approach to their Free Jazz. On "Sister In Kith," their synergy is undeniable. Playing together live and being recorded really raises their confidence in adding swing-like changes ("brimful") and quiet passages (the Ornette Coleman-meets-Bad Plus beauty "brave to swim in this weather.") As a group, "Sister In Kith" has a wonderful Charles Mingus-plays-Eric Dolphy quality to it. Tom Riviere's bass lines are elegant and give the tracks a punch. Steve Hanley's drums are never busy, but even in subtlety finding new inner rhythms to summon. Finally, Matthew Aplin's inventive piano lines echo Monk and Cecil Taylor. "Sound Logic/Sound Magic" has some awesome doubled lines from him where his dip into different harmonies colors the mood but never just changes it. Treppenwitz's explorations of sound and interplay are some of the best you will hear in 2021. - Mik Davis, NEW MUSIC FRIDAY

For Treppenwitz‘s third musical adventure, the trio set up in a living room and pressed record to see what could be captured over the course of two days’ improvisation. That sense of intimacy and immediacy is perfectly captured on this document that finds them further blurring the boundaries that might constrict a trio that leans towards jazz, but is completely immersed in a wealth of styles and textures.

The three instruments on Sister In Kith all seem to hold a particular resonance, the clean, pure piano of Matthew Aplin dancing above the sometimes lugubrious, sometimes febrile double bass of Tom Riviere. Between them, adding a certain élan and constantly changing emphasis and structure, is the extraordinary drumming of Steve Hanley.

The listener has no real idea of where a piece may lead after its initial opening. It may start with a sweet, jazzy little flourish and descend into a mournful doldrums, the piano may take the lead, high-spirited and light, and then hand over to the double bass, drawing shadow and weight across the piece, the drums slinking on the periphery and then charging in, taking over and leading them into abstraction. There are hints of influences here and there; but it is always about little snippets, as if something has suddenly occurred to them as they play and that thought sends them in an entirely other direction.

The rubbery bass follows the piano, aping its movements in an underhand way on “Sound Logic / Sound Magic”, the fluidity of both impressing upon you that connection of the players as the piece leaps from tumbling force to stately near silence, the bass turning it into a space filled series of mournful breaths. The players instantly understand what each segment requires, with the bass strokes lending and edge of European classicism, even though I kept receiving tiny reminders of something Lalo Schifrin may have tried if invited into the warmth of somebody’s parlour.

“Watching The Arc Of Bats” made me think of a total reinvention of the intro to “Bela Lugosi’s Dead“, but with the drums stepping further and further out of orbit, expanding excitingly into a nebulous, soothing procession; while “Brave To Swim In This Weather” holds a funhouse mirror up to the classic jazz trio image, distorted by feinting and dodging around the central theme, unexpected minor key stabs whirling the listener and dropping subtle hints of the minimalism of Rachel’s, but stripped further down. Boy, do they know how to swing though. ”Brimful” is a real ’60s treat, bass and drums a constant surge, delicious little fills sing every inch of the kit, right down to the rims and the cymbal stands it seems. The tempo is inexorably raised and ends in a rush of joy.

It is quite a relief to find the vast, open landscape of “Dream Of A Common Language” unfolding afterwards as the drums rustle in the decay of the piano, the bass memories hanging in the chilled air. Here is where you fully appreciate the fact that they are playing in a room together, sounds bleeding into one another as the notes diminish, distant details picked out on the horizon, specks of cloud and the lost flight of birds, framed in the expanse. Their desire to leap from whim to whim is what keeps the listener alert, the post-Dave Brubeck hints of “Sockeyed / Loose Laces”, with its quicksand of drums and ceaseless bag of eels bass wriggling fitfully behind the staccato piano intrusions, then drifting into near stasis as if stunned by a spectral vision thrown into relief against its frantic opening.

The album does keep giving, but its ending is yet another change of mood. The stately and melancholy piano of “A Mackerel’s Tale” is supported by the inebriated friendship of the bass and drums. You can imagine them sitting on a park bench somewhere, attempting consolation of the bittersweet piano as Nel Begley delivers her lines, standing slightly apart as if the players feel this is how Piano Magic should have really sounded. Her desire — “I want to shout wake up” — resounds through the music, and as the piece ebbs to a close, you just have the feeling that another chapter could have opened up right here.

This is a delight. Treppenwitz are a jazz trio for the new age, but with an intimacy and skill that is just perfect. - Mr Olivetti, FREQ