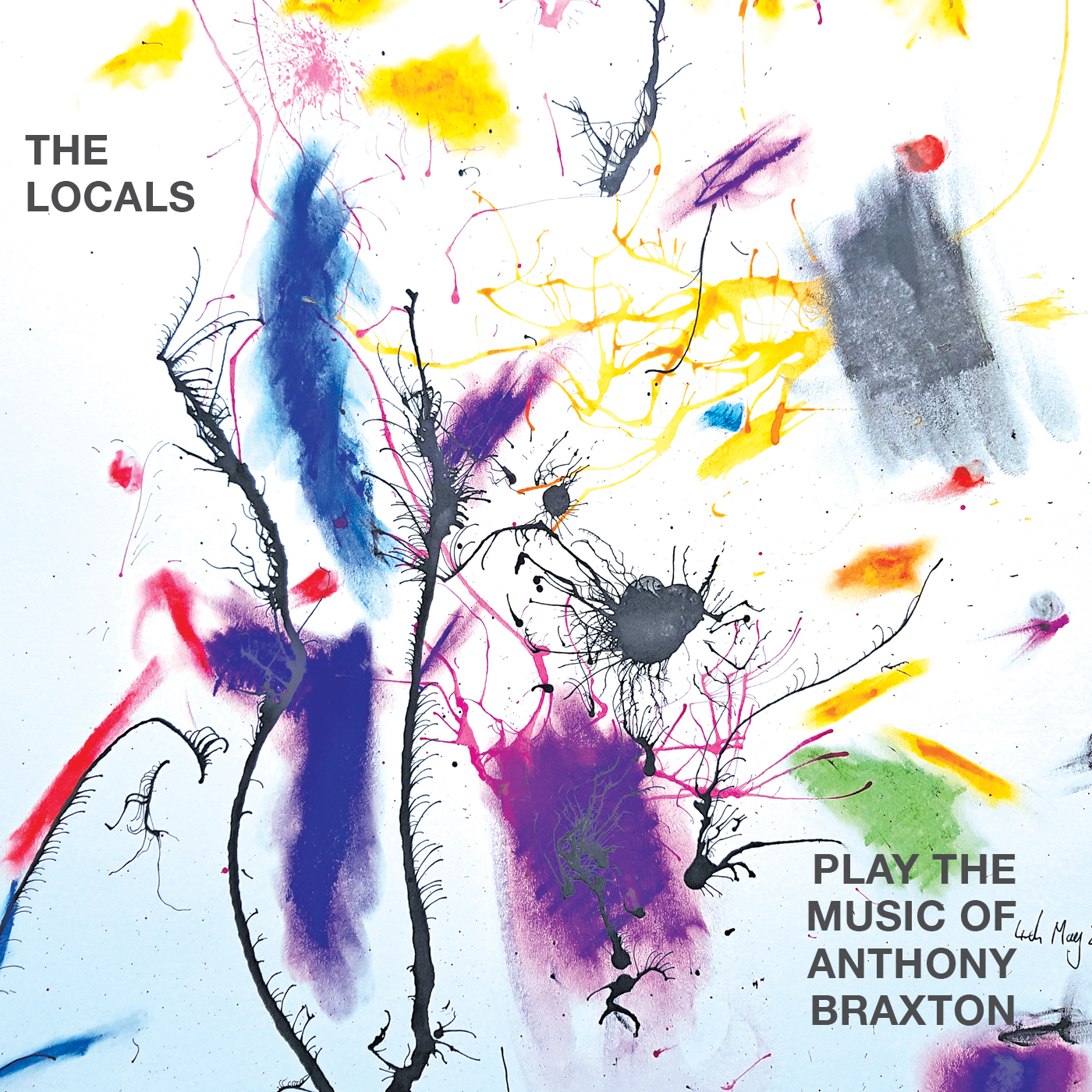 An exciting live performance recorded at the festival Konfrontationen Nickelsdorf in 2006, featuring six early compositions by Anthony Braxton arranged for the band by Pat Thomas.

When Discus Music asked Pat what recording he had in his personal archive that he would most like to see released, this one was Pat’s choice. Pat’s arrangements of these angular melodies allow Alex Ward’s stratospheric clarinet to fly over the band’s churning grooves, and much excitement was generated in the process – as can be heard from the wild audience response!

Oxford brings the funk to Anthony Braxton on this wildly entertaining set from the 2006 Konfrontation Festival in Ulrichsberg, Austria. Pianist Pat Thomas's arrangements lay in the pocket funk and reggae grooves under the oblique themes, exploding any notions of Braxton's music as forbiddingly cerebral. The sly curls of wah guitar on Composition 40b recall electric Miles, topped with avant Dixie clarinet from Alex Ward and dissonant piano splashes from the leader. Composition 6c opens with a bass and guitar scramble reminiscent of Saccharine Trust's punk improv, until the groove kicks in and Ward lets rip with vaulting glissandi. Composition 6i sets a loping rhythm against a wonky clarinet motif and Thomas's rhythmic clusters. It's such a joy you almost forget how audacious it is. - Stewart Smith, THE WIRE

The ability of a composition to exist in different genres, versions, or permutations is, to me, evidence of its power, and, more than anyone, I think Anthony Braxton baked this idea into his mix. Listening to the early recordings of Braxton (mainly the Arista records, which is where most of the tunes on this album come from) has been one of the great joys of my life, but following him for the past forty years, I know that he is more than the sound of his recordings. Braxton has developed the idea of “trans-idiomatic” music, i.e., music that exists across boundaries. Not in the surface po-mo sense, more eclectic than thou, playing a quilt of genres very quickly. Or even making a “wide variety” of music over the course of a career.

Braxton’s compositions are trans-idiomatic in the sense that they conform to no particular idiom or aesthetic, and thus, can be made to work in all of them. For example, the Braxton album, Five Pieces 1975, really is a jazz album (go figure), with bass, drums, horns. And while a tune like “23g” to me sounds like a post bop free jazz tune, there is nothing in the composition that requires it to do so. The structures, insinuations, and improvocations written into the score don’t require that it come out “jazz like.” There’s nothing in the score of a Braxton tune that even requires them to be Braxton-esque.

Pat Thomas has taken these Braxton compositions and arranged them for his band, The Locals, and has come out with something that brings out all of the joy, power, invention, and intrigue of Braxton’s music, without sounding Braxton-esque. The band (Thomas on piano and melodica, Alex Ward on clarinet, Evan Thomas electric guitar, Dominic Lash, electric bass, and Darren Hasson-Davis, drums) is wearing a downtown funk hat, with wonderful, repetitious bass and drum lines that are deeply in a groove. The backbeat keeps calling attention to itself, not because it’s intrusive, but because it never occurred to me how well Braxton structures would work with a backbeat. Paul Thomas’s piano operates at the level of a very energetic Don Pullen. Falling down onto the rhythm with a quality of strained mercy (like the rain), while Evan Thomas’s guitar is the broad brush that ties it all together, connecting the levels and making it all so plausible. Ward finds himself cast, inevitably, into the Braxton role, but he is not merely Braxton-ing. The compositions, and Braxton’s ethic, wouldn’t allow that. Ward’s stories and attacks are his own and I love the heck out of them (until there is no heck left, at all).

Aside from being an amazing good time — really, fave album so far this year — this album is a gift of vision. Like seeing a geographic feature from a new angle for the first time, you gain insight into not only what it looks like but how it exists in the world in three dimensions. I feel like I know more about 23g (and 6i and 40b etc.) than I did before and know more about the experience of them. I created a Spotify list of Braxton’s performances of these pieces , in the running order of the Local’s recording [1] . It is fascinating listening to them side by side and discerning what Braxton and the composition demanded, and where there was space was left for the musician to be (not where you would necessarily expect); where things are emphasized (funk floor foil to the piano and clarinet), and others de-emphasized (not so many of those long, sinewy, winding melodies played in glorious, obsessive unison).

Sometimes the best “covers” are reinterpretations of original works that don’t resemble said originals at first blush. But on further listens, a resemblance emerges in structures if not melodies. Pat Thomas’ newly-released archival recording of Anthony Braxton pieces fits nicely into that category. Thomas is a prolific and well-versed, pianist, composer and improviser based in the UK. On this effort, which was recorded live at the Konfrontation Festival, Ulrichsberg in 2006, he is joined by Alex Ward on clarinet, Ewan Thomas on electric guitar, Dominic Lash on bass, and Darren Hasson-Davis on drums.

There is no shortage of Braxton reinterpretations, including notable 2020 releases from Thumbscrew and Tropos. But where the source material was apparent in these more recent recordings, this 15-year-old offering does not scream “Braxton”. Instead, Thomas arranged a number of early Braxton pieces (Compositions 40b, 6c, 115, 23b, 6i, and 23g) into 6-9 minute bursts of guided improv. The signature Braxton angularity is present, notably so on Composition 115 as one example. But the group also adds elements of groove and a pseudo-funkiness that one does not often associate with the composer. Indeed, the duels between piano, guitar, and clarinet are worth of attention alone. Thomas, of course, throws in his percussive keyboard pounding here and there, which is always welcome.

If anything, Thomas and company take a loose approach to Braxton that is refreshing and unexpected. Highly recommended whether or not you are an established friendly experiencer.  https://avantmusicnews.com/2021/01/31/amn-reviews-pat-thomas-the-locals-play-the-music-of-anthony-braxton-2006-discus-music/

To the casual listener, finding an entry point into the complex and substantial body of work by US composer Anthony Braxton can seem like a daunting task.  It seems the only successful way to truly gain access to Braxton's multi-faceted musical universe is to simply leap right in and enjoy the ride.  To some extent this is exactly what UK pianist-composer and improviser Pat Thomas and his group The Locals has proven here.....With clarinet player Alex Ward to the fore, the group strom through a selection of Braxton's early compositions.....that have been loosened from their academic conservatory moorings and given a poundng new groove that floats in the direction of funk. Despite this tweaking, Braxton's original compositional blueprints have not been totally discarded, but used more as a guide that prompts the musicians to take the music in a different (perhaps more accessible) direction. The hardcore Braxton devotee will perhaps be occasionally confounded by Thomas' approach, but throughout this thoroughly enjoyable exercise the spirit of the original force that created this music remains defiantly intact - Edwin Pouncey, JAZZWISE

Piano and melodica player Pat Thomas’s personal choice of archive material led him to choose a concert at the Kronfontation Festival, Ulrichsberg in 2006 for this 2021 Discus release. I don’t know a lot about Anthony Braxton’s music except that it is very often at a precipitous level of avant-garde that only the most devoted of free jazzers would get into. Having said that I also know from what I have heard that Braxton has been known to play ‘standards’ and his music shows a highly advanced level of musicianship and invention so it was a daunting task that The Locals took on and I didn’t really know what to expect. There are six early Braxton compositions tackled here, all with the name ‘Compositions’, most with a number and letter beside them. What surprised me is how accessible the music turned out to be with the rhythm section of Dominic Lash and Darren Hasson-Davis doing an excellent job in providing a strong undertow of funky grooves, perfect for Alex Ward’s virtuosic clarinet flourishes of sound and Pat Thomas’s keyboards. I smiled to myself on listening to one composition (Don’t ask me which!) to find that I had written down, “a playful swamp stomp with laughing clarinet building to a fantastically anarchic climax.”  The line-up is completed by Evan Thomas on electric guitar and I’m not entirely sure how I would define the music except to say it sure makes you feel good and gets the speakers bouncing. Judging the by the audience response I think they agree! - Phil Jackson, ACID DRAGON

Discus Music has the policy to search for relevant (live) recordings that remained on the shelf so far. This goes for releases they realized for recordings by Keith Tippett and Tony Oxley. This time they asked Pat Thomas to have a look in his archive and to propose a recording that would make a relevant release. And yes, he came up with a steaming live performance recorded at the Konfrontation Festival, Ulrichsberg in 2006. We hear Pat Thomas (piano, melodica) with his quintet The Locals (Alex Ward, clarinet; Evan Thomas, electric guitar; Dominic Lash, electric bass and Darren Hasson-Davis, drums), performing six early works by Anthony Braxton in arrangements by Thomas. To be precise they perform compositions ‘40b’, ‘6c’, ‘115’, ‘23b’, ‘6i’ and ‘23g’. Pat Thomas is a pianist from London who played with Derek Bailey, Tony Oxley, Lol Coxhill, a.o... In more recent times he did programs of music by Monk and Ellington. No idea how Thomas made his choice from the immense oeuvre of Braxton. And what is more surprising he decided to create funky renditions of the original. My knowledge of Braxton’s work is limited, but I’m pretty sure that funk never was his thing. To make a comparison I listened to some of the composition in a performance with Braxton himself. Like ‘Composition 40 B’ in a live performance from 1977 of George Lewis, Muhal Richard Abrams, Mark Helias, Charles ‘Bobo’ Shaw and Anthony Braxton. That makes clear how drastic Thomas’ rearrangements are and what a find it is to put some funk in these compositions. It really works for most of the tracks that have an inescapable groove. Also, the intros of ‘6c’and ‘115’ are great. On the other hand, while I got accustomed to this approach it became a bit one-sided for me. Happily ‘23b’ and ‘23g’ are an exception to this. Nevertheless, this is a very fresh and lively recording, offering an original and surprising perspective on the music of Braxton. And the first release by this enthusiastic unit. - Dorf Mulder, VITAL WEEKLY