CM023 - Some Some Unicorn - Unicornucopia 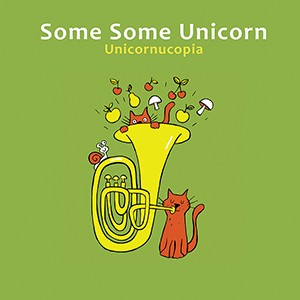 A second Unicorn release made by Shaun Blezard on his Clutter Music label.

Some Some Unicorn has evolved from an online collaborative project into a free flowing collective of improvising musicians, poets and artists who value shared experience and community. The band is led by composer and improviser Shaun Blezard and started during his time as New Voice Composer with Sound and Music. The first SSU album was Some Some Unicorn and The Golden Periphery.

Since the debut album SSU has evolved into a remarkable live experience. Live the outfit is between 8 and 14 strong and is always different, drawn from many genres but with a focus in free improv, jazz and ambient drone. Touching points for the SSU sound are Alex Cline Ensemble, Talk Talk, Spontaneous Music Ensemble and The Kilimanjaro Darkjazz Ensemble.

The second SSU album Unicornucopia was the result of a successful crowd funding campaign and features tracks recorded live in the studio, with limited overdubs. Studio sessions were held in Salford, London, Lancaster and Ulverston. Unicornucopia is released in September 2016 and features over 50 players.

Modern, beautiful, jazzy, difficult, free; it’s pretty hard to pin down exactly what Some Some Unicorn are. All I know is, I love what they do – Ben Gaunt – The Sampler

Sometimes awkward and uncomfortable, other times completely compelling, this second release from noise collective Some Some Unicorn is an even more ambitious project than their first. – Cumbria Live

They are just as dizzyingly exhilarating as they sound. At times their sound is infuriatingly indescribable, which just makes one focus further on the music. This allows one to appreciate how stunningly intricate and diverse the pieces are……. It’s so incredibly creative and compelling. Not sounds to rock out to, but definitely one for music-lovers who appreciate the eclectic, and we do.  - Other Worlds Festival

The sounds oscillate (sometimes literally) between noise, tuneful fragments, delicate melodies, questing ambience, social commentary, and so on but the whole thing hangs together as a single and coherent aural journey, practically cinematic, a tribute to large-scale creativity and the editing skills of Mr Blezard. Dave Foxall – A Jazz Noise